Two weeks ago Republican House Speaker John Boehner announced the formation of the House Select Committee On Politicizing Benghazi. Since that time, Democratic Leader Nancy Pelosi has been weighing whether to participate in the obvious charade being performed by House Republicans. Today she decided that Democrats needed to be represented on the panel and named the five members who would fill that role (Pelosi video). 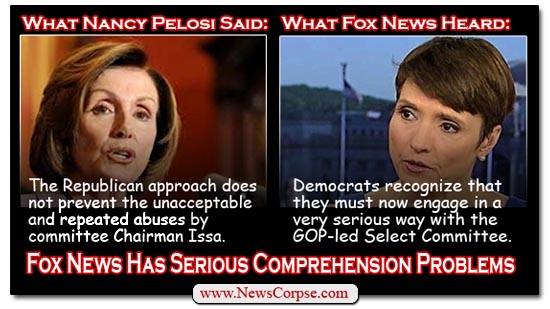 Fox News carried the announcement (although they cut short their coverage when the new ranking member, Elijah Cummings began his remarks), but they wasted no time following the event to utterly distort what Pelosi had just said. She began by lamenting that it was unfortunate that “…the Republican obsession with Benghazi has not been about the victims, their families, or our country.” And she could not have been more clear about her condemnation of the blatant partisanship and politicization of the process by Republicans. [Emphasis added]

Pelosi: Over the past two weeks we have engaged in good faith discussions with Speaker Boehner over the shape and standards of the Select Committee. We had hoped for a level of fairness, transparency, and balance. Especially considering the subject matter. We were not able to reach any agreement. Regretably, the Republican approach does not prevent the unacceptable and repeated abuses by committee Chairman Issa in any meaningful way.

Consequently, Pelosi concluded that the history of Republican corruption in previous hearings made it “all the more reason for Democrats to participate.” That’s not a particularly compelling argument. The risk that participation would confer a measure of credibility to the committee was more than enough reason to abstain. Nevertheless, Pelosi had made her decision despite some lingering doubts.

Pelosi: I could have argued this either way. Why give any validity to this effort? But I do feel it’s important to the American people to have a pursuit of these questions in as fair and open and balanced way as possible. That simply would not be possible leaving it to the Republicans.

Carlson: I don’t know how you feel about this, but I’m stunned that Nancy Pelosi has made this decision because we just heard from Jay Carney a few moments ago, still calling it a Republican conspiracy theory.

Herridge: Well, Gretchen, the thing that jumped out at me in this news conference is that there seems to be a subtle shift in tone. What we have heard consistently from the Democratic leadership is that this is going to be a kangaroo court. We did not hear that at the news conference. I think what we heard was a recognition by the Democrats that they must now engage in a very serious way with the Republican-led Select Committee. And this is a reflection of the fact the members of this Republican Select Committee are very serious in nature.

Where on earth did Herridge get the impression that Democrats were recognizing any speck of seriousness on the part of the Republican pretenders orchestrating this phony committee? Pelosi had just slammed them as repeatedly abusive and untrustworthy when left alone. It almost seems as if Herridge is attempting to portray Pelosi as expressing respect for the committee she just finished denouncing as unfair and unnecessary. Herridge continued, and added a new element of political intrigue to the discussion.

Herridge: So this is a recognition by the Democrats that they must seriously engage, and that it would be a political mistake not to be engaged and to leave some of these issues unanswered. Especially leading up to the midterm elections.

Note that this is the first reference to politics. Pelosi said nothing about it in her remarks, but Herridge has now accused Pelosi of making a politically driven decision aimed at the upcoming midterm elections in November. Herridge’s introduction of politics is as baseless and offensive as the the Republicans efforts to fundraise off of the Benghazi tragedy. And then she follows up with a decidedly biased and negative characterization of the Democrats just assigned to the committee.

Herridge: What’s also striking to me, I think you could make the argument that several of the committee members are true partisans and have been on the attack on Benghazi from the get-go. So they seem to have been picked by the Speaker (sic) as way to answer these Republican allegations the administration, in effect, dropped the ball on Benghazi, they mislead the American people, and even more specifically that there was real negligence at the State Department that was led by Mrs. Clinton.

Really? After praising the Republicans on the committee as “serious,” Herridge is calling the Democrats “true partisans” who have been on the attack? Wouldn’t that description better fit the Republicans (and, of course, Fox News) who have been attacking on this issue for nearly two years? Herridge even mistakenly referred to Pelosi as the Speaker as she launched into a diatribe against Democrats, the administration, and Hillary Clinton, whom she baselessly called “negligent.” At this point Carlson chirped back in to dishonestly put words into Pelosi’s mouth.

Carlson: So Catherine, you’ve been covering this from the beginning. What happened in these meeting with John Boehner and Nancy Pelosi to go from just last week Pelosi saying Benghazi, Benghazi, Benghazi, and not wanting to talk about it, to now saying “Well, we need to give validity to this effort?”

Of course, Pelosi never said that she needs to give validity to the committee. Quite the opposite. She clearly communicated that the only reason she was participating in the GOP farce was because it is so utterly lacking in validity. However, Herridge is demonstrating why the Democrats should have refrained from participation. Because even when they explicitly declare that the committee has no validity, Fox News and the GOP will twist their words to imply a validity that doesn’t exist. And if that isn’t enough, Herridge then went on to heap more praise on the Republican members of the committee.

Herridge: There is a real recognition that this is going to be a serious-minded investigation. The Republicans have chosen people with the requisite oversight background, also a legal background, two former U.S. attorneys, and they will, in effect, be able to move through this in a very methodical way. And they will be able to fill in these gaps. And it’s these gaps that represent, I believe, based on my reporting, real jeopardy for the Democrats, for the White House, and even more specifically, for former Secretary of State, Hillary Clinton, and what this may mean for her possible presidential ambitions.

Once again, Herridge has injected politics into the debate, along with her perspective/hope that the committee’s work will be harmful to Democrats, particularly President Obama and Secretary Clinton. And if she hasn’t yet made herself clear, this is how she framed her bottom line.

Herridge: But the bottom line, for the folks at home, is the Democrats recognize it’s going to be a serious effort, and would be a political mistake not to engage in the fullest possible way.

In all, Herridge said four times that Democrats recognize that the committee will conduct a serious investigation, despite having no confirmation of that view from any Democrat. Herridge simply made it up, (much like the way Fox News produces most of their stories). And she repeatedly thrust politics into the discussion. In that regard she may be revealing the true motives of Fox News and the Republican Party. Neither are the least bit interested in a search for answers or solutions. From the start, the Benghazi fever that has infected Fox and the GOP was always about politics. It was, and is, an attempt to tarnish the President and to conduct a preemptive strike against Hillary Clinton’s possible campaign for president in 2016. They couldn’t care less about the American lives that were lost or about ways to prevent such loss in the future.

The reporting by Fox News recounted above came just seconds after Pelosi’s televised announcement about the Democratic members she assigned to the committee. So Fox had to have been prepared in advance with the harshly partisan and political response that ensued. This was an orchestrated hit job on Pelosi that was likely devised by Fox’s CEO, and former Republican media strategist, Roger Ailes. And it illustrates, once again, that Fox is not even pretending to be a news enterprise. It is a brazenly partisan division of the Republican Party and a mouthpiece for raging conservatism.