The National Tea Party Convention is over, but the battle for the soul of the so-called “movement” continues. Sarah Palin set the tone at her keynote speech to close the affair: 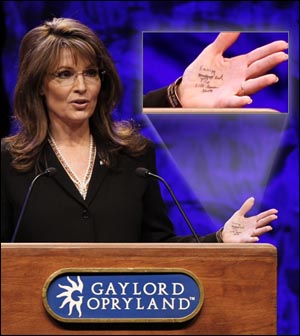 The “future of politics” is typical Palin hyperbole. Clearly she doesn’t understand what she’s saying. This is a woman who just got through mocking President Obama for using a TelePrompter, while she has crib notes written on her hand for a Q and A to follow her speech; A woman who told her adoring audience not to be afraid of being God-fearing; A woman who told Chris Wallace that Obama could ace his reelection if he were to “play the war card” by attacking Iran. This is the same woman who thinks it would be smart for the GOP to absorb the Tea Baggers.

On that measure she is not alone. Despite protestations from ostensibly neutral players, leading figures in both the Tea Party and the Republican Party believe that they are made for each other. This contradicts those who say that Tea Baggers are non-partisan and are angry with both parties equally. The truth is that the Baggers were always more closely aligned with Republicans and the evidence is their own words:

John Boehner, House Minority Leader: There really is no difference between what Republicans believe in and what the tea party activists believe in.

Michael Steele, Republican Party Chairman: It’s important for our party to appreciate and understand that so we can move toward it, and embrace it.

Mark Skoda, Tea Party Leader: This movement is beginning to mature … not as a third party but a force to be reckoned with in the traditional party structure.

Newt Gingrich, Former GOP House Speaker: If the Republican Party offers a positive alternative in a way that Tea Party activists and independents join them, the tide could turn.

At this point it is inescapable that the Tea Party is a functional subsidiary of the GOP. Much of it’s original organizing muscle was provided by establishment Republican operatives like Dick Armey’s FreedomWorks and GOP PR firm Russo Marsh & Rogers. And now heavy-hitter Republicans like Palin are gripping the Baggers in a polar bear hug. All of this needs to be remembered when lazy or dishonest members of the press try to pretend that partisanship isn’t playing a part in this phony movement.