Last week’s Republican primary in Mississippi has stirred a frenzied response from Tea Party wackos who are convinced that the nomination was stolen by brigades of law-breaking African-Americans (is there any other kind to the right?). Loser Chris McDaniel has still refused to concede the race to incumbent Thad Cochran. 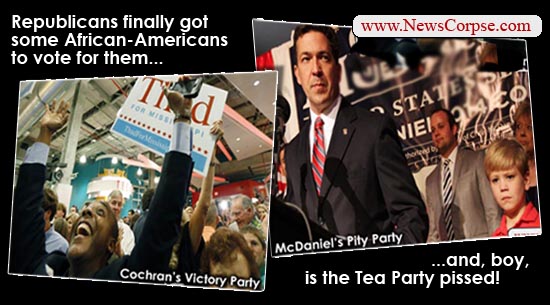 McDaniel appeared on Fox News last night with ardent support Sean Hannity. He told Hannity of his suspicions of massive electoral foul play, although he offered no evidence. McDaniel said that…

“We’re looking into the issue of whether or not people who participated in the June the 3rd Democratic primary crossed over into the Republican primary this Tuesday night. And we’ve already found more than a thousand examples of that in one county alone.”

This morning Pete Perry, the Republican Party Chairman of Hinds County, to which McDaniel was referring, issued a statement refuting the unfounded charges. In the statement Perry included an example of just how far removed McDaniel is from reality.

“As a committee, we are still in the process of going through the election results before they can be certified, but this morning we can discuss some of the specific examples that were raised yesterday.

“As an example in Precinct 14, the Fondren Presbyterian Church precinct, the numbers cited by the McDaniel campaign yesterday included 192 ‘illegal votes’ – people that they claimed had voted in the Democrat primary on June 3rd but then voted in the Republican run-off. That is impossible. According to the certified results of the June 3rd Democrat primary, there were only 37 total Democrat primary voters at that particular precinct.”

So McDaniel claimed that there were 192 illegal Democratic votes in a precinct that had only 37 Democratic votes total. That’s a pretty good indication that McDaniel’s complaints are pile of certified rubbish. He is just an egomaniacal sore loser who is certain that a secret cabal of Republicans and Democrats are conspiring against his holy Teabagger crusade. When all that actually happened is that voters acted lawfully to choose a candidate that is not McDaniel, and Cochran was smart enough to employ all legal measures to achieve his victory.

Oddly enough, I agree with McDaniel’s opposition to Democrats selecting Republican candidates, and vice versa. This is only possible due to the enactment of open primaries where people from any party are permitted to vote regardless of their registration. This was never a good idea because political party candidates should only be selected by members of their own parties. Why on earth should a Democrat get to choose who the GOP puts up for office? However, the open primary movement was a creation of right-wingers who saw it as a method of unseating entrenched Democratic incumbents. For instance, in California in 2010, open primaries were enacted via an initiative that was put on the ballot by a Republican state senator and supported by GOP governor Arnold Schwarzenegger.

Now that this hare-brained concept has come back to bite them in the ass, the Tea Party is furious at what a perversion of democracy their idea actually is. So what do they do in response? Do they retract their support for open primaries and commence a campaign to end them? Of course not. They claim that black criminals have perverted the electoral process and steps must be taken to invalidate their votes. That should help the GOP’s outreach to minority constituents as much as flying a Confederate flag at their campaign rallies will.

The upside of this affair is that the Democratic senate candidate in Mississippi, Travis Childers, just saw his chances of winning in a deep red state increase substantially. McDaniel’s delusional supporters are so upset at Cochran that many of them are already declaring that they will not vote for him in November. Some are even talking about a write-in candidacy for McDaniel, or launching a third Party campaign, which Sarah Palin has been hinting at. When this is all over, the Democrats may have to send McDaniel a thank you card.