The ongoing protests at Murrieta, California have exposed a nauseating dark side of nativist prejudice on the part of right-wing anti-immigrant activists. Their hostile screamfests aimed at frightened children on buses is almost too barbaric to be believed. And now their media champions at Fox News have revealed that the motivation behind the coverage of these troglodytes is purely political. 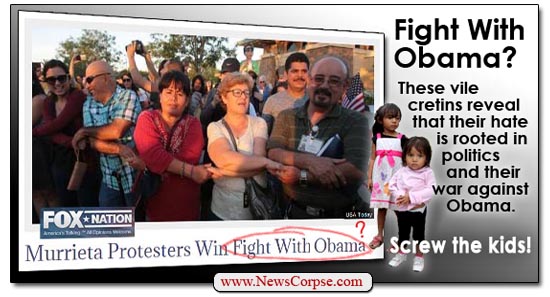 The headline on the lie-riddled Fox Nation website cheers that “Murrieta Wins Fight With Obama.” With Obama? So the Fox Nationalists see this humanitarian crisis as just another partisan scuffle with the president they despise so ferociously? They don’t recognize the plight of children who are alone, impoverished, scared, and uncertain of their future? They obviously aren’t concerned with working on possible resolutions to the problem. The only thing relevant to them is that their designated enemy in the White House can be tagged with a defeat.

And what is the victory of which they are so proud? Hundreds of kids are terrorized by bitter, hateful clods with grimacing faces and intimidating signs that the kids can’t even read. The process of getting these kids through the immigration bureaucracy is stalled, exacerbating the problem to which the protesters supposedly are objecting. And politicians are swept up in the tide of racism that makes legislative solutions even more remote. Congratulations.

It should also be noted that the victory of hate being celebrated by Fox is another Fox lie. Although officials have temporarily halted the busloads of children into the San Diego area, citing reduced backlogs in Texas, Lombardo Amaya, union president of the El Centro chapter of the National Border Patrol Council, told The Desert Sun that “This does not mean that we will not continue to receive more loads in the future.” No doubt the child-haters will be back on the protest line should the busing resume. And with them will be Fox News and the rest of the wingnut press who will hype this beastly crusade just like they did for deadbeat rancher, Cliven Bundy.

Finally, the reaction from the right to Obama’s proposal for $3.7 billion to address the current crisis has been resoundingly negative. On Fox News they resorted to complaining that this is a large sum of money to be allocating to immigrant children when there are still American children who are hungry, homeless, or otherwise deprived. ARE YOU FRIGGIN’ KIDDING ME? These are the same jerkwads who have been viciously condemning what they derisively refer to as “The Welfare State.” They oppose every form of relief from housing aid, to food stamps, to school lunches, to Head Start, to tax reform, etc.

Now Fox News expects us to believe that they favor allocating funds to needy American kids? Message to Fox News: We are not as stupid as your standard viewer. If you really care about American kids, then show it by supporting the programs listed above. And if you still think that immigrant kids should be left to starve, or be returned to poverty and violence in their home country, then just make that argument without pretending to care about Americans.

2 thoughts on “A Fight With Obama: Fox News Admits That Their Immigration Coverage Is Purely Political”