Yesterday marked the long-awaited (by lobotomized tea-bots) exhibition of Glenn Beck’s latest scam to fleece his dimwitted disciples. Beck hosted a nationwide promotion for his anti-Common Core book and philosophy in 600 movie theaters that linked to his live simulcast from Dallas. 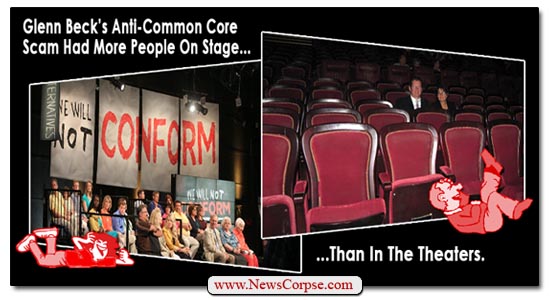 To be clear, this was simply a version of his regular Internet video blog, except that people had to pay twenty bucks a piece to watch what they would ordinarily have been able to see online and in the comfort of their own homes. And remember, Beck’s Internet venture extracts $10.00 a month from his flock just to see his regular programming. With this event he made them go out to a movie theater and pay an additional $20.00 for essentially the same fare. Who but Beck fans would be stupid enough to fall for that?

Apparently, not even very many of Beck’s loyal websters were taken in. The Washington Post reports, from their attendance at a screening in Maryland, that the event drew only seventeen people. Perhaps turnout was better in some backwater Texas or Louisiana burbs, but there is no reliable data available to confirm.

The program consisted of already aired criticisms of Common Core from Beck regulars like evangelist David Barton and professional Obama-hater Michelle Malkin. The material was a rehash of the false allegations that Common Core (or ObamaCore as wingnuts have come to call it) is an intrusion by the federal government into our local school system. That fallacy has been thoroughly debunked. The Common Core standards were developed entirely by representatives of the National Governors Association and the Council of Chief State School Officers – all local organizations. Furthermore, Common Core has broad-based bipartisan support including from GOP stalwarts like Jeb Bush and Mike Huckabee.

The opposition to Common Core stems almost entirely from the knee-jerk reaction to oppose anything that President Obama has remarked on favorably. Additionally, opposing Common Core fits in nicely with the generally negative attitude that the right has toward education. They have a visceral aversion to “elitists” who have obtained college degrees. They flatly reject science with regard to settled issues like evolution and climate change. Their whole attitude toward academia is one of horror that people might actually become educated. That would significantly reduce the number of potential Teabaggers they could rope in.

So Beck’s latest scam may have duped a few pathetic followers, sold a few more books, and redistributed some wealth from misled schnooks into Beck’s sleazy pockets. No big deal, sheep are used to being fleeced. But to make matters worse, Beck’s program kicked off with some serious, and hilarious glitches. The video performance flaked out for about four minutes, however, Beck’s audio continued. Consequently, the audience was treated to Beck’s commentary voice-over during a trailer for the new James Brown biopic, Get On Up: