The Centers for Disease Control may want to get involved soon because the epidemic of Obama Derangement Syndrome is spreading unchecked in the halls of Congress. A draft resolution to honor Pope Francis, authored by Republican Peter King and Democrat John Larson, has been stalled by an acutely myopic band of GOP obstructionists. 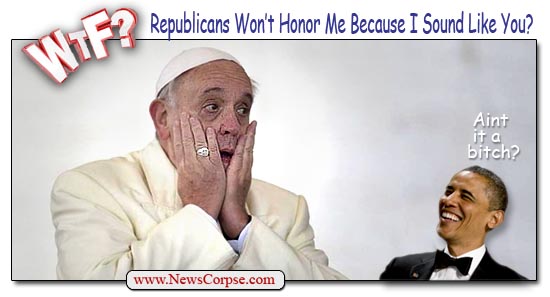 H.Res.440 seeks to recognize Pope Francis for “his humility, his commitment to economic justice and improving the lives of the poor, and his outreach to individuals from all walks of life.” Those surprisingly non-controversial reasons for honoring the new Pontiff has the Tea Party Republican caucus steeping in anger and refusing to join the tribute. According to a GOP source who spoke to The Hill, the alleged reason for their disrespectful non-participation is that…

“Some Republicans believe the pope is ‘sounding like [President] Obama. [The pope] talks about equality — he actually used the term ‘trickle-down economics,’ which is politically charged,’ the GOP official said.”

OMG! The head of the Catholic church has debased Christianity by daring to discuss equality and empathy for the poor. Certainly Jesus would never have done anything like that. And to the extent that President Obama has articulated the same philosophy, the Pope is obviously aligned with his Marxist agenda.

That’s why, of the 221 co-sponsors of the bill (more than enough to insure passage), only 19 are Republicans. But at this point, GOP Speaker John Boehner has refused to bring it up for a vote. The Hill’s source also complained that Francis is “too liberal,” as demonstrated by his distaste for the harmful effects of unbound free markets and his tolerance for civil unions.

To be sure, Pope Francis has shown himself to be a devoted advocate for the disadvantaged of the world. He has made headlines for his willingness to humble himself before those he serves in profound ceremonial gestures like washing the feet of the poor, including women, and embracing the sick. In an official Vatican “Evangelii Gaudium” (The Joy of the Gospel), The Pope went into stark detail about the greater harm of the greed and power associated with world markets and unfettered capitalism. Some of the more illuminating excerpts include…

“Just as the commandment ‘Thou shalt not kill’ sets a clear limit in order to safeguard the value of human life, today we also have to say ‘thou shalt not’ to an economy of exclusion and inequality. Such an economy kills.”

“In this context, some people continue to defend trickle-down theories which assume that economic growth, encouraged by a free market, will inevitably succeed in bringing about greater justice and inclusiveness in the world. This opinion, which has never been confirmed by the facts, expresses a crude and naïve trust in the goodness of those wielding economic power and in the sacralized workings of the prevailing economic system. Meanwhile, the excluded are still waiting.”

“In this system, which tends to devour everything which stands in the way of increased profits, whatever is fragile, like the environment, is defenseless before the interests of a deified market.”

“As long as the problems of the poor are not radically resolved by rejecting the absolute autonomy of markets and financial speculation and by attacking the structural causes of inequality, no solution will be found for the world’s problems or, for that matter, to any problems. Inequality is the root of social ills.”

No wonder the Republicans view this Pope as the reincarnation of Karl Marx. And this isn’t the first time that Francis has been disparaged with an association to our president. Last December News Corpse reported on a story on Fox News that declared that “Pope Francis is the Catholic Church’s Obama – God help us.” The story warned that the popular new Pope is already headed in the wrong direction and that “just as President Obama has been a disappointment for America, Pope Francis will prove a disaster for the Catholic Church.” That was a rather remarkable insult coming from a network whose roster is heavily dominated by Roman-Catholics.

And that’s not all. Rush Limbaugh said that “If it weren’t for capitalism, I don’t know where the Catholic church would be. This is just pure Marxism coming out of the mouth of the Pope.” Sarah Palin complained about his “liberal statements.” Glenn Beck, although not referring directly to the Pope, begged his disciples to “run as fast as you can” from any church that uses the words “social justice,” which, of course, are the very words the Pope used.

However, no one should be surprised by the overt hypocrisy that runs rampant through the ranks of America’s right-wing. They have never been particularly pious except when it justifies their political bias. To them Catholic teachings are only meant to be followed so long as they are in harmony with Republican doctrine. And often, they are not. But Pope Francis had something to say about this as well:

“Politics, though often denigrated, remains a lofty vocation and one of the highest forms of charity, inasmuch as it seeks the common good. […] I beg the Lord to grant us more politicians who are genuinely disturbed by the state of society, the people, the lives of the poor!. It is vital that government leaders and financial leaders take heed and broaden their horizons, working to ensure that all citizens have dignified work, education and healthcare.”

As far as Republicans are concerned, that was a campaign ad for the Democratic Party.

4 thoughts on “WTF? GOP Balks At Honoring Pope Francis Because He “Sound[s] Like Obama””