Republicans and their friends at Fox News have mastered the art of building mountains of bullshit from the lowliest troll-hills. It’s one of their favorite tactics to malign Democrats. Just grab a sentence fragment from a long speech and pretend that it is the whole of the comment from which it was extracted. Then feign outrage that such an awful remark could have been uttered. 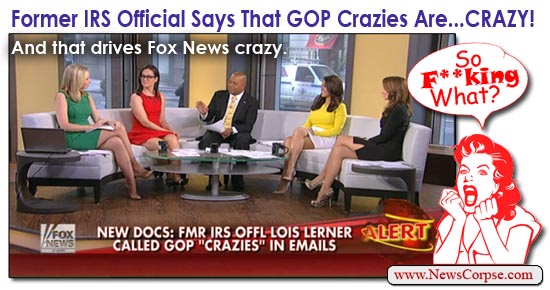 The latest example of this rhetorical deceit was demonstrated when the GOP chair of the House Ways and Means Committee, Dave Camp, unscrupulously and selectively released some emails purported to be from Lois Lerner, the former IRS official who has been hounded by malevolent cretins like Rep. Darrell Issa in an attempt to fabricate ammunition to use against President Obama. Despite hundreds of wasted hours (costing millions of taxpayer dollars) engaged in hyper-partisan investigations, the Republican Inquisition has produced nothing implicating the President in any untoward activity.

The emails that Camp is now crowing about are just as meaningless as all of the other bogus “smoking guns” that these wingnuts have claimed would topple the administration. The headline that Camp has wrenched from the documents is that Lerner may have referred to certain individuals as “crazies” or “a-holes.” And, of course, this would only be an atrocity if those individuals were Republicans. Suffice to say that Camp wouldn’t give a Fig Newton if they were Democrats.

As Camp characterized this affair, Lerner was allegedly caught red-handed expressing her disgust for Republicans. And as the person at the center of the controversy over whether the IRS improperly subjected Tea Party groups to extra scrutiny when they applied for tax-exempt status, Camp believes that these emails prove that she was biased. Consequently, Camp regards the emails as justification for appointing a special prosecutor and escalating the legal assault on Lerner and, ultimately, the White House.

There’s just one problem. The emails don’t don’t say what Camp alleges they say. And even if they did it wouldn’t mean anything. Most people in government have personal opinions and allegiances. There isn’t anything wrong with that, so long as it doesn’t interfere with the fair execution of their duties. And the evidence shows that Lerner’s department scrutinized applications of all political persuasions. The only organization that was denied tax-exempt status during the time in question was a liberal group.

As for the emails, Camp’s assertion that Lerner had expressed a general bias against Republicans is false. And by focusing narrowly on the use of specific pejorative language he is being deliberately dishonest. She did say that there are crazies and a-holes, but she was clearly referring to a far-right fringe, not the rank and file GOP. The person with whom she was corresponding was not identified. [Update: The person has now been identified as Lerner’s husband. This makes the whole thing even less controversial] Here is a transcript (complete with typos) of the email exchange beginning with Lerner describing a conversation she overheard of women in England where she was visiting.

Lerner: Overheard some ladies talking about American today. According to them we’ve bankrupted ourselves and at through. We’ll never be able to pay off our debt and are going down the tubes. They don’t seem to see that they can’t afford to keep up their welfare state either.
Unknown: Well, you should hear the whacko wing of the GOP. The US is through; too many foreigners sucking the teat; time to hunker down, buy ammo and food, and prepare for the end. The right wing radio shows are scary to listen to.
Lerner: Great. Maybe we are through if there are that many a-holes.
Unknown: And I’m talking about the hosts of the shows. The callers are rabid.
Lerner: So we don’t need to worry about alien teRrorists. It’s our own crazies that will take us down.

So we start off with Lerner actually defending America and taking a rather conservative view of the national debt, while noting the hypocrisy of the English women who were criticizing the U.S., but ignoring similar issues with their own economy. Then the other person brought up the matter of the “whacko wing of the GOP,” who hold apocalyptic views of America’s imminent demise. It is those nut cases that Lerner referred to as a-holes and crazies. And that is, quite clearly, what they are.

In the end, Camp and his …er… camp, are really complaining that Lerner called crazy people crazy. But when put in context, she absolutely did not direct those remarks to Republicans at large. It is Camp who is extrapolating the whackoness to include all Republicans. And if that’s his view of his party, well, that’s his problem.

3 thoughts on “So F**king What? Former IRS Official Says That GOP Crazies Are…CRAZY!”