Here it comes, folks. The Fox News sufferers of ODS (Obama Derangement Syndrome) are exhibiting advanced symptoms of ever greater severity. Their determination to demonize President Obama is returning to the absurdly elevated levels that characterized the last two elections when they portrayed him as a friend to terrorists and a foreign-born Marxist who hates America.

The latest in their cavalcade of lunacy is a report that compares Obama to Pope Francis with a headline feature, “Pope Francis is the Catholic Church’s Obama – God help us,” that is insulting to both of them. 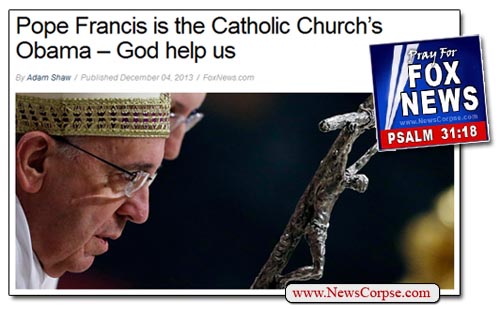 The story, in predictable Fox fashion, assails the President as a weak, ineffective leader who naively panders to his enemies. What was less predictable is the attribution of the same failings to the previously infallible Pope. The author, Fox News editor and self-described Catholic, Adam Shaw, begins by declaring that the popular new Pope is already headed in the wrong direction and that “just as President Obama has been a disappointment for America, Pope Francis will prove a disaster for the Catholic Church.” That’s a pretty strong condemnation directed at God’s anointed representative on Earth. Either Shaw knows better about what’s best for the church than the Lord Almighty, or he just wants to exploit this matter to beat up on a president he and his bosses despise.

Shaw’s argument supporting this view loiters around feverish criticisms that the Pope is insufficiently dismissive of gays, contraception, and those churchly nuisances, the poor. He chastises the Pope by grumbling that “Francis thinks by talking vacuously about the poor, he will be respected.” What Shaw means by “vacuous” is the Pope’s remarkable exhortation on economic inequality that rebuked the idolatry of money and trickle-down economics (you know, like Jesus did). It’s a theme the President picked up on yesterday in his speech on the same subject, but what Shaw called “vacuous” Obama called “eloquent.”

“The Pope himself spoke about this at eloquent length. ‘How can it be,’ he wrote, ‘that it is not a news item when an elderly homeless person dies of exposure, but it is news when the stock market loses two points?'”

Shaw sums up his screed with a twin-barrel attack on both Obama and the Pope as confused and deceived dupes of some sort of covert socialist cabal:

“Like Obama, Francis is unable to see the problems that are really endangering his people. Like Obama he mistakes the faithful for the enemy, the enemy for his friend, condescension for respect, socialism for justice and capitalism for tyranny.”

There is nothing particularly new in Shaw’s offensive rhetoric. It is a rather typical example of the Fox News, right-wing disparagement of any advocacy on behalf of society’s less fortunate. Any public activism that doesn’t inure to the benefit of elite, wealthy individuals and corporations is looked upon as tantamount to Marxist tyranny in the eyes of modern Tea Party conservatives. And the opportunity to wrap their hostility in a blanket of feigned spirituality proved just to compelling to resist. God help us, indeed.