Adding more fuel to the Republican obsession with removing President Obama from office, Fox News invited disgraced author and unrepentant birther, Edward Klein, to reveal the results of his fantasy investigation of the alleged friction between Obama and Hillary Clinton. Klein’s latest news flash, and Fox News headline, is that “Obama Danced to Avoid Clintons at Party.” 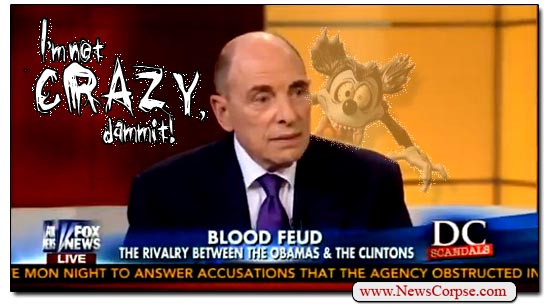 Klein appeared on Fox & Friends with the brown haired dude who is not Steve Doocy (Brian Kilmeade) to recount his tale of presidential acrimony. The discord supposedly began after Clinton expressed her opinion that more should have been done to clamp down on ISIS when they emerged in Syria. That’s a perfectly reasonable position, although one fraught with controversy. At that time there were few Syrian rebel groups that could be trusted to pursue the interests of the United States. Indeed, many of Syrian President Assad’s opponents were associated with what became ISIS.

Subsequent to the initial media frenzy over Clinton’s alleged attempt to distance herself from Obama, Clinton denied that there was any rift between her and the President. As evidence she called Obama to assure him that she had not meant to criticize his overall foreign policy. In addition, she was already scheduled to attend a birthday party for a mutual friend that the Obamas would also be attending. The media falsely turned this into some kind of a peace summit between the once, and possibly future, presidents. Of course in the real world it was a birthday party.

This is where Klein steps in to unveil his long-squawked theory that Clinton and Obama are mortal enemies. He told Kilmeade that…

“My sources tell me that what happened there at the party is that instead of it being a hug-a-thon, it became a freeze-a-thon, and the Clintons essentially ignored the Obamas, and the Obamas got up from the table and danced almost the entire night in order to avoid having to talk to the Clintons.”

OMG! The President and the First Lady were dancing as means of politically oppressing a perceived foe. It’s a tyrannical tactic that even Hitler never tried to use against his enemies. As for Klein, one has to wonder if these are the same sources that told him that Hillary was dropping out of the presidential race; or that Obama was secretly planning on endorsing Elizabeth Warren to succeed him; or that Chelsea Clinton was the spawn of Bill Clinton raping his lesbian wife, Hillary.

Klein’s sources appear to be imaginary trolls inhabiting his otherwise vacant cranial cavity. He never authenticates his allegations or conducts even the most basic principles of journalism ethics. But what he said immediately after his shocking revelation about Obama’s dance of distraction is more informative than anything that appears in any of his lie-riddled books:

“What I’m trying to say is, in a sense, what happened there in the Vineyard was ripped from the pages of my book “Blood Feud” because the blood feud continues.”

And there you have it. This is nothing more than an advertisement for his cheesy book. And Fox News is gleefully participating in the ad campaign by hosting an author who has nothing substantive to say. Although from Fox’s perspective it is another opportunity to bash both Obama and Clinton that they couldn’t pass up.

The problem that Fox, and their Republican cohorts, have is that while they have been feverishly condemning Obama’s policies, they were thrown into a cognitive mind warp when Clinton appeared to do the same. After all, what were they to do? Embrace the position of Clinton who they are expecting to face in the presidential election in 2016? Or renounce her and effectively endorse the Obama doctrine?

In the end they are awkwardly trying to do both. Obama is wrong because, in their fetid brains, he’s always wrong. But Clinton isn’t right, she is merely being looked up to for disagreeing with Obama, but even that is only for political reasons. It’s a typical right-wing illogic-loop that can spin for eternity – or at least until the hypnotic trance that Fox has imposed on their cult members (aka viewers) has faded.