The incessant and ignorant fixation on when, where, and how often President Obama takes vacations is becoming surreal in its frequency and fervor. The President’s critics seem to be obsessed with the issue. Never mind that Obama has taken far fewer vacation days than his predecessors, or that there has never been any negative incident arising from his holidays, or that the presidency travels with the President wherever he goes, the compulsion to relentlessly attack this President is irresistible to the politicians and pundits on the right. And they are not above outright lying about it.

It apparently has never occurred to these crackpots that there are strategic justifications for maintaining a routine schedule. By suddenly altering his itinerary, the President could be tipping off enemies that there is something being planned that they should defend against. And if any evidence is required to support this theory, one need only go back to May 1, 2011, when President Obama was a guest at the White House Correspondent’s Dinner in Washington, DC. He was criticized at the time by conservatives who thought it unseemly that he would attend a party that featured comedians and where he himself would deliver a joke-filled monologue. Setting aside the fact that the event is a charitable fundraiser that has provided hundreds of thousands of dollars in scholarships, there is another reason why the criticism was unwarranted. 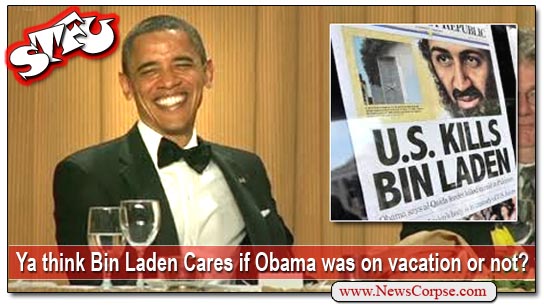 On May 1, 2011, a team of Navy SEALS stormed the compound of Osama Bin Laden in Abbottabad, Pakistan, killing him and ending a decade long search for justice. At the time of the raid Obama was seen laughing at jokes, including some about Bin Laden, without letting on what was occurring 7,000 miles away. It would have been unnecessarily risky for the President to mysteriously cancel his plans to attend the dinner and rush back to the Oval Office. But by playing it with a straight face there was no hint of the covert action for which he had already given the green light.

Today’s critics of the President are in no better position to ascertain what he is doing behind the scenes than they were in May of 2011. They have no way of knowing if there are sensitive operations in progress that the White House needs to keep under wraps. They don’t even care that it is important for America’s leaders to be seen as unwavering and unafraid in the face of adversity, rather than running for cover and shifting gears every time the enemy posts video evidence of their brutality on YouTube. The wingnut media is only interested in how they can fling more mud at the President. And it is that, and not their pseudo-patriotic posturing, that is their primary mission.

4 thoughts on “STFU About Obama’s Vacations Already And Remember Where Obama Was May 1, 2011”