This is how the Republican establishment came to be known as “wingnuts.” These right-wing nut cases are so befuddled by anti-Obama hysteria that they can’t seem to articulate a coherent thought. This isn’t demonstrated anywhere better than in the contentious immigration debate that has stripped naked the conservatives tendency for overt racism. 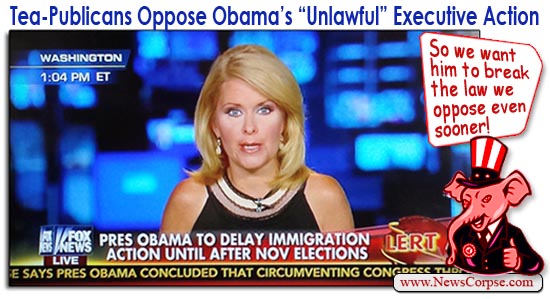 Yesterday Fox News correspondent Molly Henneberg took to the airwaves to report that the Obama administration has decided to delay an anticipated executive order to address the struggle of undocumented immigrants in the United States. It is an action that Republicans staunchly oppose as what they falsely deride as amnesty. In addition, they regard Obama’s use of executive orders as unconstitutional and are even suing him for issuing them.

However, with Obama’s decision to put off any action until after the November midterm elections, the GOP is trembling with outrage. In effect, they are infuriated because Obama isn’t breaking the law sooner by taking a step they bitterly oppose. To please these lunatics he would have to do the very things for which they are criticizing him, which wouldn’t please them at all. That’s checkmate in Bizarro World.

To be sure, the President’s decision to put off the policy is rooted in politics. Several Democratic senators in red-leaning states are worried that unilateral action by Obama would damage their reelection aspirations. But the President recognizes this and doesn’t shy away from it. He even acknowledges the political concerns in a forthright statement released by a White House spokesman:

“The reality the president has had to weigh is that we’re in the midst of the political season, and because of the Republicans’ extreme politicization of this issue, the president believes it would be harmful to the policy itself and to the long-term prospects for comprehensive immigration reform to announce administrative action before the elections.”

That demonstration of transparency is being met by Republican bombast and deception. Their whining about the delay is plainly based on their own political considerations, but they refuse to admit it. They are just as concerned about the same senatorial campaigns as the Democrats. But instead of being honest, as was the White House, they assume an indefensible posture demanding that the President do something that they adamantly oppose and regard as illegal.

The coverage of this circus by Fox News reeks with their well-known right-wing bias. Henneberg’s report places all of the blame for politicization on the Democrats, saying that…

“Some Democrats had been concerned that if the President took executive action on immigration that it might energize Republican voters who want tighter border security before citizenship for illegals right before the midterms.”

There is no mention in Henneberg’s report that Republicans are just as concerned that the delay might weaken their electoral challenges. Even worse, Henneberg outright lies about the substance of the planned executive order when she cites the GOP’s interest in “tighter border security” and the question of citizenship. She fails to note that Obama’s policy actually calls for the enhancement of border enforcement and that there is nothing remotely resembling citizenship in the works. That canard is standard fare by right-wing dissemblers and propagandists. As is the use of the pejorative term “illegals,” that most credible news organizations have ceased to use.

For the record, the anticipated executive order is only expected to address the granting of work permits and temporary relief from deportation. That is a far cry from amnesty, and an even farther cry from citizenship. But it would relieve some of the stress caused by the situation; it would reunite families; and it help the economy by turning undocumented workers into taxpayers and contributing members of the community.

What’s more, Republicans always have the opportunity to avert any executive action by doing one simple thing: pass an immigration bill in Congress. The President is only considering unilateral action because Republicans in Congress refuse to do their job. And now they are exacerbating their laziness and rank politicization by making absurd demands that are contrary to their own stated principles. Hence wingnuts.