The frenzy of frightened Fox News figures who have been consumed by panic over the threat of ISIL terrorists invading our tranquil communities continues to grow in numbers and intensity. On Saturday morning a panel of business correspondents took up the issue on Fox’s Bulls and Bears (and Immigrant Children, oh my). 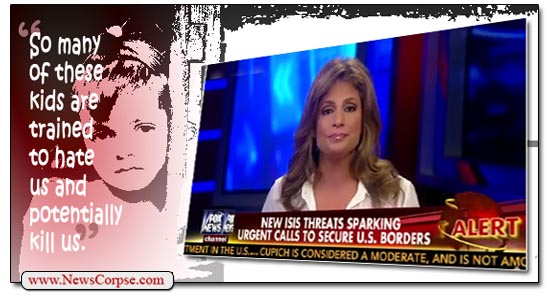 The segment (video below) was introduced by host Brenda Buttner as “the ISIS border threat we may all regret if we don’t stop it now.” She summarized the imminent doom facing America from terrorists plotting to sneak across our porous southern border to wipe us out as we sleep. This gruesome prospect was presented as more than speculation and she wondered how many more warnings would be required before Washington “gets it.”. Of course she never offered any evidence that any terror suspects had entered the U.S. in this manner, or that there was any credible intelligence of it . She just unloaded a series of allegations without any factual basis.

That was enough for the first panelist, John Layfield, a retired professional wrestler, to spew a stream of unrelated assertions involving ISIL’s alleged blueprint for international terrorism and the presence of murderous drug cartels in Mexico. Layfield’s background makes him the perfect guest to provide analysis on these sort of national security issues. He was rebutted rather effectively by Gary B. Smith, a hedge fund manager, who wisely kept his commentary limited to his area of expertise, the economic aspects of securing the border. He questioned the efficacy of building a border fence for an estimated $22 billion when none of the perpetrators of 9/11 entered the country illegally and other border barriers like the Berlin Wall were commonly breached thousands of times a year.

But Stealing the thunder of prominent members of the Psycho-Chicken Little Society like Lindsey Graham, was Fox regular Tracy Byrnes. Her hysterical assessment of the looming threat was riddled with indignation that nobody was treating the situation with the appropriate measure of urgency.

“It’s really serious and this has been something that has been bothering me for a while now. We are not taking it serious enough. ISIS is here. I don’t care what anybody says. They’re here.”

How typical of a Fox News commentator to declare that she doesn’t care what anybody says. She has her own delusional, nightmare scenarios firmly affixed in her mind and she will not be distracted by reality. But she’s only just getting started. She goes on…

“What scares me the most, Brenda, is that they infiltrate the minds of children and when children cross the border everyone, you know, the tears start coming down. We want to take care of them, but so many of these kids are trained to hate us and potentially kill us. And yet we are just letting them in, welcoming them with open arms, paying for their medical, paying for everything and it’s just going to come back to bite us.”

Exactly! Somehow ISIL has gotten to these gullible waifs, who are fleeing violence in their native countries, and brainwashing them to hate the Americans who are providing them with safety, food, and health care. All the while these kids are plotting to grow up and cut our throats or blow up our shopping malls. Byrnes didn’t reveal where the terrorists were conducting this training or why children who have been rescued from lives of misery, danger, and fear would succumb to an ideology that just perpetuated it and was directed at their rescuers.

Surprisingly, other than Byrnes and Layfield, the panel was fairly united in dismissing the most outlandish claims by the Fear Caucus. The frantic whimpering of the bed-wetting set has been shown to be utterly without foundation. Recently PolitiFact assessed a claim by GOP/Tea Party Rep. Trent Franks, who said that “It is true that we know that ISIS is present in Ciudad Juarez (Mexico)” And except for the fact that it isn’t true and that we don’t know it, it was a pretty good soundbite. PolitFact rated it “mostly false,” while noting that similar false claims were made by Sen. Marco Rubio and many in the right-wing media such as the Daily Caller, Breitbart News, and Sean Hannity. PolitiFact also revealed that the source of the claim was the ultra-conservative organization, Judicial Watch. When asked for more information to affirm their allegations, JW’s president Tom Fitton simply refused.

Not to be outdone, Fox host Jeanine Pirro served up her own steaming plate of crazy with a paranoia drenched tirade that boosted the profile of ISIL over the tyrant King George of England, Jefferson Davis’ Confederacy, Hirohito’s Japan, Bin Laden’s Al Qaeda, and even the genocidal regime of Adolf Hitler:

“Tonight America faces the single biggest threat in her more than 200-year history. Worse than what we faced in World War I, World War II, the attack on Pearl Harbor, and Al Qaeda on 9/11. […] The damage will be painful and it will be extensive. […] I’ve been telling you for months that you need to be afraid.”

Pirro’s grasp of history is pitifully weak. For the record, ISIL is, so far, responsible for the deaths of two Americans. They have a long way to go before they can be regarded as worse than World War I (116,000 fatalities), World War II (405,000), the Civil War (625,000), or even Al Qaeda who lag behind at 9,700 if you include 9/11 plus all casualties endured during both the Afghanistan and Iraq wars (which, of course, are not all attributable to Al Qaeda). And on the basis of her stupendously ignorant raving, she boasts that “for months” she’s been telling her wretched viewers that they “need to be afraid.” How dumb do you need to be to continue following her advice?

The fanatics at Fox News are desperately trying to drive their viewers into a sky-is-falling state of psychotic distress, and they have no qualms about using blatant lies to achieve their ends. It’s a shameful and unethical tactic that squarely fits the definition of terrorism (ter-uh-riz-uh m) – noun: The use of violence and threats to intimidate or coerce, especially for political purposes.

For more examples of Fox’s fear fetish…
Get Fox Nation vs. Reality. Available now at Amazon.