News Corpse would like to thank NewsBusters, the uber-rightist, ethically-challenged answer to Media Matters, for bringing to our attention an article in the Washington Post that describes a “tense showdown with Native Americans [and] Redskins fans.” The face-off occurred during the filming of the Daily Show who, according to NewsBusters’ executive editor Tim Graham, lied to the unsuspecting bigots assembled to defend the offensive NFL team’s name. 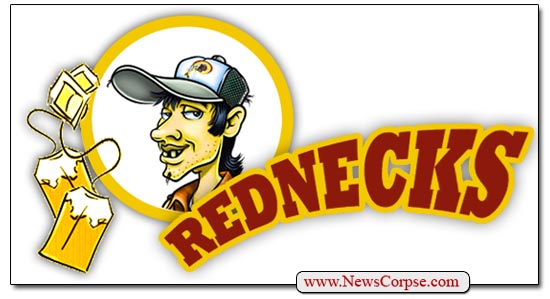 The setup for the segment involved four Redskins fans who the Post reports “eagerly signed up, most of them knowing that they might be mocked in their interview with correspondent Jason Jones.” The problem arose when they were surprised by a group of Native Americans who confronted them regarding their support for a term that is widely viewed as derogatory.

The Post describes one of the team’s fans as so upset that “she left in tears and felt so threatened that she later called the police.” Seriously? This woman felt threatened by peaceful civil rights activists engaging her in conversation with cameras rolling for a comedy show? The police, of course declined to take any action since there was no real threat and no laws were broken. But the fact that she felt compelled to report this act of felonious funning as a crime speaks to her own guilty conscience.

The fans complaining about how the segment unfolded were fairly open about what troubled them. They did not seem to regret their support for the team name or their own offensive comments. In fact, the Post noted that “All four fans said they still would have gone on the show if the producers had told them in advance that there would be a debate.” What they objected to was that they were allegedly not told that they would have to face some of the people they were maligning. One fan said that he would not have worn his Redskins jacket had he known there would be Native Americans there (Isn’t that considerate of him?)

In other words, they were perfectly happy to use insulting slurs against Native Americans so long as there weren’t any around to hear them. It’s not unlike racists who routinely use the N-word, except when there are African-Americans in the vicinity. It’s the same reason that the KKK wear hoods to conceal their identity. Bigots know that their views are repulsive and insulting, so they take pains to keep from expressing them in the company of those to whom their hate is directed.

This is behavior with which the victims of prejudice are all too familiar. Although at times they also experience outright bigotry, such as occurred in a different part of the Daily Show segment. As reported by the Post…

Notably, while NewsBusters re-posted nearly the entire Washington Post article, they left out only that paragraph, and one other that they paraphrased instead. So NewsBusters’ account of this story deliberately withheld the evidence of the racism that is a common component of the Native American experience. The other omitted paragraph related the complaint of a fan that the Native Americans were more media savvy than the group of fans. NewsBusters regarded that as unfair, despite their approval of the same tactic when used by conservatives like notorious Fox News ambusher Jesse Watters.

It is a sad testament to the state of race relations in America when people caught expressing their prejudices are not upset because they were caught. They openly admit that they would have been comfortable with the interview had they not been forced to confront the objects of their hate. So being exposed as racists is fine, just as long as they don’t have to do it around “those” people. And for some reason, NewsBusters thinks this reflects badly on the Daily Show, not the racists.