The modern advertising industry has developed unprecedented techniques to persuade, cajole, and seduce the American people into directed patterns of consumption and lifestyles. Our decisions about which cars to drive or sodas to drink are all influenced by a steady stream of commercial messaging nearly everywhere we go. But now the Republican Party has taken on a public relations task that dwarfs all other efforts at opinion-making. They boldly aim to convince the American people that Republicans are people too. 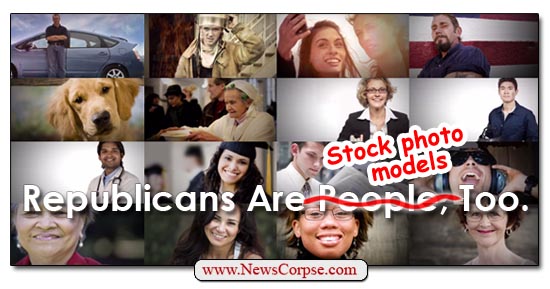 GOP media manipulator, Vinny Minchillo, is the mastermind of this crusade to remake the Republican image into one that embraces a human component. He tried to do the same thing a couple of years when for Mitt Romney’s presidential campaign. Now Minchillo has created a website called “Republicans Are People Too.” and posted a video there to make a case for that dubious proposition (video also posted below). But the text accompanying the video conveys only a determination to whine about the plight of the poor, mistreated Republican. He moans that…

Perhaps the answer to that question is: When Republicans started calling Democrats fascists, communists, moochers, whores, traitors, and devils.

Minchillo’s video is a simple production that seeks to enumerate a series of “regular” folks that he labels with a the hashtag “IAmARepublican.” It is a fairly comprehensive list of average Americans who are not generally associated with the exclusivity, racism, and intolerance of the Republican Party. It is no wonder that the GOP is yearning to attract more of the type of people in the video, because it is a cross-section of the nation that represents its diversity, a word that makes the right tremble. The video consists of a parade of alleged party members and asks “Did you know Republicans…”

Drive Priuses, recycle, listen to Spotify, put together IKEA furniture, are white, black, Hispanic, Asian, read the New York Times, use Macs, are grandmas, daughters, moms, are left-handed, are doctors, welders, teachers, donate to charity, enjoy gourmet cooking, shop at Trader Joe’s, like dogs, and cats, have tattoos, have tattoos and beards, have feelings, are people who care.

The problem with the argument that Minchillo is making is that the people claiming to be Republicans in his video are not actually Republicans. And by that I don’t simply mean that those types of persons are not Republican, which on the whole they are not. I mean that those specific people in the video are not. In fact, they were photos taken from stock image suppliers. A search for a random selection of the photos in the video found many of them in the iStockPhoto website’s library of images. The persons in the paragraph above that are links will lead you to the stock image page for each one.

So the video produced in order to convince everyone that Republicans are real people is populated by fakes. They are models pretending to be the characters that the video claims represent actual members of the Republican Party. And that’s about as real as it gets for the GOP.

This would be a hilarious aside to the pathetic PR that is constantly pushed by right-wing propagandists. But it is actually just another rung in their ladder of deception. It is reminiscent of the effort by Mitt Romney’s presidential campaign to persuade voters that “We’re Not Stupid.” When you have to mount an advertising blitz to sell the public on the notion that you’re not stupid, you have already lost the battle. And the same thing goes for a campaign to assert your people-ness. If the public doesn’t already know that you’re people, good luck trying to convince them.