The fallout from an offensive “joke” told by Fox News host Eric Bolling has quite properly reverberated throughout the media. Bolling callously insulted jet fighter pilot, Major Maryam Al-Mansouri of the UAE Air Force, as “boobs on the ground,” even as she was putting her life at risk in combat against the ISIL terrorists. Bolling’s colleague Greg Gutfeld joined in the misogyny with a childish taunt that she wouldn’t be able to park her aircraft.

It was encouraging to see the widespread condemnation of these remarks, including from many on the right. One of the responses came from a coalition of veterans who wrote an “Open Letter to Fox News” to express their outrage and disappointment. The letter signed by sixty veterans and called on Fox News to apologize.

However, the ultra-rightist magazine American Spectator couldn’t join the responsible members of our society in recognizing the harm of the Fox News hosts’ infantile remarks. They published an article that maligned the veterans as “partisan hacks” and dismissed their justifiable rage as deceptive and self-righteous. The article, by former Reagan White House political director Jeffrey Lord, was titled “The Hit Job On Fox News,” as if the veterans concern for the welfare of soldiers in the field were nothing but a slam on a notoriously biased cable news channel. 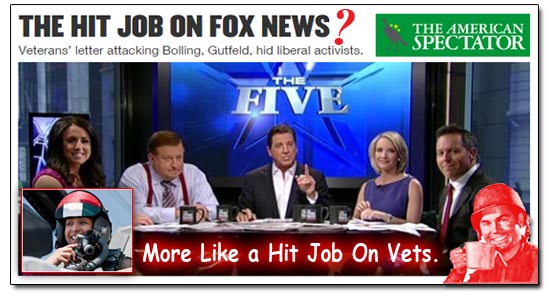 The gist of the Lord’s argument was centered on the identity of the vets who signed the letter. Lord complained that the vets were only identified by their name and the branch of service they were in. To Lord this was an opening to attack the vets as politically motivated. So he did a little research and found that some of them could be affiliated with Democratic organizations or officeholders. Oh my freakin’ Gawd, somebody call 911.

The first problem with Lord’s idiotic gripe is that it disparages the views of veterans if they have a political ideology that is different than his own. He is, in effect, dishonoring vets by dismissing them unless they agree with him. If some of those who signed the letter are in fact affiliated with Democrats that is their right. They fought for it and they are entitled to express themselves.

On a more fundamental level, Lord’s painfully trite analysis comes up far short of the conclusions he makes. There are sixty veteran signatories on the letter, but Lord only provided additional information on sixteen of them. That means that 70% of the signatories were not connected to Democrats and Lord has no idea if they are Democrats or Republicans. Nevertheless, he maligned the whole lot as partisan hacks who should be ignored. That is extraordinarily flawed logic and further indicts him as generally anti-veteran.

Lord exacerbates his anti-vet stance by actually defending against what he calls “an attack on Fox News and two of the co-hosts on the Fox show The Five — Eric Bolling and Greg Gutfeld.” Apparently Lord doesn’t believe the Fox hosts warranted the criticism they received. He goes out of his way to distract from the original offensive comments and bizarrely twist the narrative around to a conspiracy against Fox and an attack on women’s advocates. Lord says that…

“…this isn’t really about Eric Bolling or Greg Gutfeld. What this is really all about is a hardcore and on-going political effort to smear Fox News. This time as part of that ‘war on women’ business liberals need to survive politically.”

In other words, Lord wants us to forget about Bolling’s insult to soldiers and women, and turn our attention to the poor, beleaguered, defenseless, Fox News. That is, if nothing else, a creative take on the matter. But it doesn’t succeed unless the whole of the audience is as dimwitted as that of Fox itself.

The bottom line is that Lord’s position is even more insulting than Bolling’s because it encompasses all veterans, not just a single pilot, and denies them the respect they have earned. And all that Lord has done is to confirm the phoniness of the right’s alleged patriotism and support of the troops. Conservatives only adhere to those principles when it benefits them, or they can use it to bash liberals.