Yesterday’s broadcast of The Five on Fox News featured a brief segment (video below) wherein Kimberly Guilfoyle delivered a rather inspiring tribute Maj. Maryam Al Mansouri, a female fighter pilot from the United Arab Emirates who led the UAE’s forces in attacks on ISIL.

Guilfoyle aimed her comments directly at the terrorists saying “Hey ISIS, you were bombed by a woman.” She highlighted the poetic justice of religious extremists who won’t even allow women to drive cars, getting blown away by a competent, accomplished female soldier from an Arab nation. Unfortunately, the response from her male colleagues on the program was somewhat less dignified. 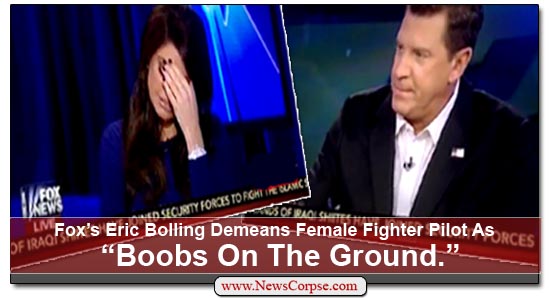 The panel’s resident troll, Greg Gutfeld hurled a stereotypical insult at the Major saying that “The problem is, after she bombed it, she couldn’t park it.” Then Eric Bolling chimed in with a demeaning and sexist query, “Would that be considered boobs on the ground?” And all Guilfoyle could do was plaintively ask why they were ruining her piece.

If that were the only example of offensive, juvenile, anti-woman behavior by Fox News jerks it would be bad enough. But this came shortly after Brian Kilmeade and Steve Doocy of Fox & Friends made “jokes” about the lesson from the video of Ray Rice beating his girlfriend into unconsciousness is that he should have taken the stairs where there were no cameras to capture his assault. It came after Fox News “psycho” analyst Keith Ablow belittled First Lady Michelle Obama’s efforts on behalf of healthier children saying that “How well can she be eating. She needs to drop a few.” It came after Fox’s Anna Kooiman introduced right-wing YouTubers, the PolitiChicks, as “A lot of hotness on the couch this morning.”

The pattern of demonstrating such brazen disrespect for women is a familiar part of Fox News programming. They regard women as little more than eye candy for their predominantly old, male viewers. Fox CEO Roger Ailes has been reported as insisting that his female anchors wear skirts and show leg. But to carry this boorishness over to demean a woman who is putting her life on the line against terrorists is especially repulsive. Sadly though, it is not unexpected from Fox News.

For more repulsiveness and dishonesty from Fox…
Get the acclaimed ebook Fox Nation vs. Reality. Available now at Amazon.

[Update] The following day Bolling made an apology of sorts. He said…

“I realized some people didn’t think it was funny at all. I said sorry to my wife and I apologize to all of you as well.”

So he was only apologizing because the joke wasn’t funny, not because it was brazenly offensive and demeaning to women and soldiers? And the “apology” was only directed to his wife and Fox viewers, but not to the pilot or others he insulted? Typical Fox avoidance of responsibility and ethics.

7 thoughts on “The Fox News War On Women Presents: Boobs On The Air”