Today Christians across the Fox Nation are celebrating the beginning of the high holy days that usher in the season of spiritual hostility better known as the “War On Christmas.” As tradition dictates. Fox News made the official announcement with a declaration that the government is trampling on some perceived religious liberty.

This year the devotees are honoring their German brothers by swapping the War on Christmas language for “No Tannenbaum: Federal Regs to Target ‘Hazardous’ Christmas Lights.” And as usual, the disciples weigh in with their own righteous testimony. 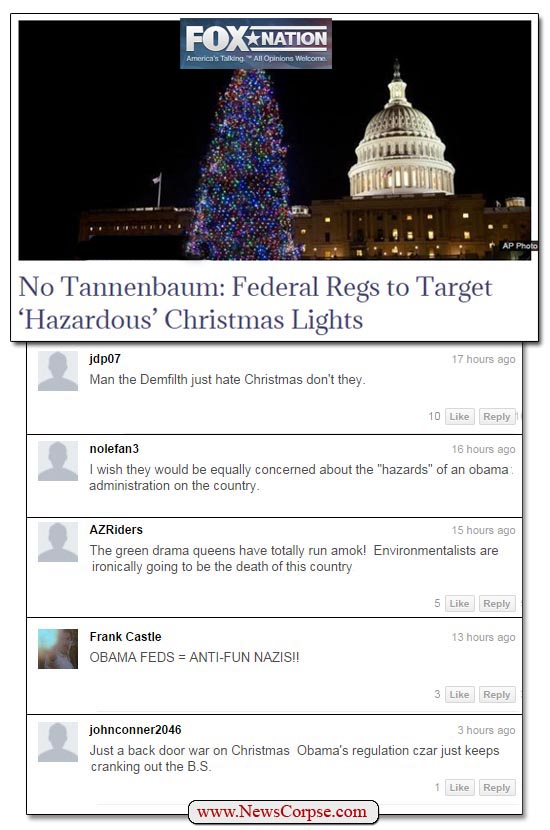 The Christian soldiers of Fox Nation are up in arms over new federal regulations aimed at reducing the injuries, including fatalities, caused by faulty lighting and other electrical decorative products. The Consumer Product Safety Commission proposed the new requirements saying that…

“Consumers can be seriously injured or killed by electrical shocks or fires if seasonal and decorative lighting products are not made using minimum wire size, sufficient strain reliefs, or over-current protection.”

The agency noted that since 1980, more than 250 people have been killed when decorative lights malfunction. However, in the view of the anti-Big Government Tea-Publican Crusaders, that’s a small price to pay for festive home ornaments. So Happy Holidays everybody. The war is on.

For more lunacy from the Fox Nation warriors…
Get Fox Nation vs. Reality. Available now at Amazon.