The Baltimore Sun’s media critic, David Zurawik, wants very badly for his analysis to be taken seriously. But it doesn’t help to burnish his credibility when he makes frequent appearances on Fox News. His objectivity is thrown into question due to the fact that his livelihood in part relies on the network that he is supposed to be reporting on. And whatever shred of objectivity remains was just wiped away by his article pimping what he called “Fox News dominance.” 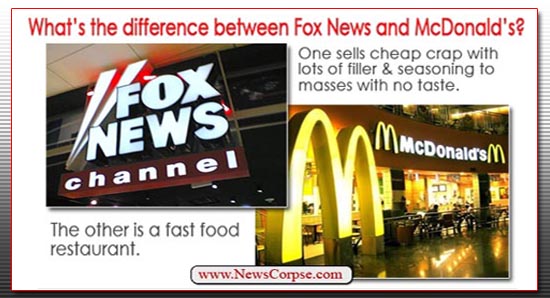 The most shallow observations of the place Fox News holds in the mediasphere are those that herald its ratings as some sort of measure of quality or influence. The truth is that Fox is not the powerhouse news operation that they pretend to be. On their best showing they pull in about three million viewers, which is a pitifully small scrap of the 100 million Americans in the television audience. What’s more, those viewers are not consumers of news so much as they are disciples of a conservative theology seeking affirmation.

Nevertheless, Zurawik’s article, which was picked up by Fox, reads like the Sermon on the Fox News Mount. He begins by inventing a premise that has no basis in reality, saying that…

“Much of the media establishment seems bent on ignoring the incredible ratings success of Fox News.”

Zurawik offers nothing to substantiate that assertion. It is obvious that Fox News has been sitting atop the ratings perch for several years, and everybody knows it. For Zurawik to make this notion that Fox’s ratings are being ignored the foundation for his analysis suggests that he has some sort of ax to grind against the “media establishment” that may be ignoring him.

The big news that Zurawik claims is missing is that Fox News had a couple of ratings successes that he regards as significant. One is that Fox drew more viewers than the network newscasts on election night. That is mainly notable because it something that they almost never do. So why isn’t the news here that the networks routinely slaughter Fox News in the ratings? Zurawik doesn’t address that.

In the process of fluffing Fox, Zurawik revealed his biases by describing MSNBC as being “slavishly devoted to Obama.” However one might feel about the political leanings of MSNBC, for a critic who is writing about Fox to highlight that without also mentioning the slavish devotion of Fox to a far-right ideology is simply journalistic malpractice.

Zurawik continues to explore this fallacy by pretending to be interested in figuring out why Fox is so beloved by such an overwhelming majority of the nation. He advises the need for serious folks like us to…

“…start seriously trying to figure out how and why it has come to pass that Bret Baier and Megyn Kelly matter more to Americans on election night than Brian Williams, Scott Pelley, George Stephanopoulos, Anderson Cooper or Wolf Blitzer.

Of course, as noted above, Bret Baier and Megyn Kelly do not matter more to Americans. they only matter more to the thin slice of zealots who watch what’s on Fox no matter what it is. By far, most Americans were watching something else on election night. In fact. most Americans didn’t even bother to vote that day. Turnout was about 36%, the lowest turnout in over 70 years.

Where Zurawik really goes off the rails is when he tries to explain why fox is, in his mind, so respected.

“I think one of the reasons for this latest evolution of ratings dominance might be that Fox was a far better watchdog on the Obama White House than any other TV news organization.

So the theory here is that by challenging those in power, by taking the heat as a watchdog on behalf of the little people, Fox earned their trust. What makes this absolute nonsense is that Fox was a lapdog during the Bush administration. They were apologists for everything from his mismanagement of the economy by giving the wealthy a big tax cut, to his negligence prior to the terrorist attack on 9/11 (when he ignored an intelligence report that said “Bin Laden Determined to Strike in U.S.”), to his launching a war in Iraq that was based on lies.

The people who watch Fox were never interested in a watchdog. They were only interested in having their biases confirmed, and worse, inflamed. Zurawik apparently missed all of that. And he further demonstrated his own bias by declaring that the administration has contempt for Americans and for the truth. But if Americans were to punish anyone for having contempt for the truth, it would be Fox News.

“Or maybe, it’s what some critics of Fox say: That those who watch the channel only want to hear one side of the story, and that’s all that Fox gives them. The implication here is that Fox viewers are stupid”

Finally, Zurawik hits on something closer to the real explanation for the one-sided popularity of Fox. It has been revealed in numerous studies that Fox News has an audience that is gravely misinformed. And that result comes from their audience having a cult-like devotion to their brand of disinformation.

In closing, Zurawik makes a disingenuous plea that we “shouldn’t let our biases blind us to the serious media criticism that demands to be done.” The buckets full of irony and gall it took for him to say that would fill a warehouse. His bias is soaking the very article that asks for this consideration. And the fact that he thinks there hasn’t already been scads of serious media criticism on this subject is further evidence of just how distant he is from reality.

And speaking of being distant from reality…
Get the acclaimed ebook Fox Nation vs. Reality.
Available now at Amazon.