Let’s get this out of the way right up front: Election day 2014 sucked elephant balls. It is saddling America with a Republican senate that is notable for being unproductive and adversarial. It’s new leader is a hyper-partisan, Washington fossil whose only agenda is obstructionism. One of its new members is an Agenda 21 conspiracy nut who carries a gun to defend herself from the government she now represents. Florida and Kansas returned to office the two least popular governors in the country. And the right-wing noise machine is going to be gloating feverishly for weeks.

But the real story underlying this election is one that the media will almost certainly fail to address. Despite the election returns, America hates the Republican Party and its policies. The turnout is estimated to be about 38%. That means that the GOP victory was achieved with a majority of a little more than one-third of the electorate, or about 20%. That is not exactly a ringing endorsement of the Republican agenda. 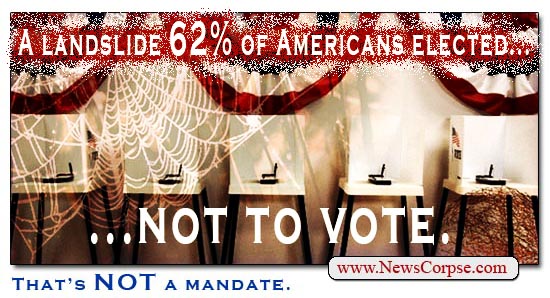 The demographic makeup of the voters this year was decidedly older and whiter. It was also more concentrated in the South which accounted for 34% of all votes. The rest of the country came in a substantial nine to twelve points lower.

Just two years ago President Obama was resoundingly reelected along with increasing the number of Democrats in both houses of Congress. The turnout then was 58%, or 53% higher than 2014. Exit polls show that both parties are underwater in voter approval, but Democrats are still favored over Republicans 44% to 40%. Exit polling also gives Obama a 41% approval rating, compared to just 13% for Congress.

On the basis of this fractured and biased sliver of the electorate, Chris Wallace of Fox News declared this morning that “The Democratic Party brand is damaged.” But further examination of the exit polls says that isn’t true. On virtually every policy question, voters sided with the Democrats. That includes ObamaCare, immigration reform, increasing the minimum wage, same-sex marriage, legalizing marijuana, abortion, and climate change. And when asked about preferences for president in 2016, Hillary Clinton is leading every GOP opponent (Clinton 42%, Jeb Bush 29%, Rand Paul 26%, Chris Christie 24%, and Rick Perry 24%).

2016 holds more bad news for Republicans and their new senate majority. The GOP will be defending 24 seats, as compared to only 10 for the Democrats. Nine of the those GOP seats are in states won by Obama in 2012. So are all of the Democratic seats. With a larger and more representative electorate it is almost a certainty that the senate will flip back to the Democrats. And with a popular and history-making candidate like Clinton that outcome is even more likely.

In the meantime, we can expect some epic battles to ensue. Although Mitch McConnell made some perfunctory remarks signalling bipartisan cooperation, his resume suggests a different course entirely. He told supporters last night that “Just because we have a two-party system doesn’t mean we have to be in perpetual conflict.” That coming from the man who presided over more filibusters than any senate in history.

But the battles will not be limited to those between the two parties. McConnell is going to experience some of the misery of John Boehner as he tries to herd the Tea Party contingent of his own party into some semblance of unity. Don’t expect Ted Cruz or Rand Paul or Mike Lee or Joni Ernst to fall obediently in line. In fact, Cruz is already announcing his intention to prosecute the President for many of the phony scandals for which the GOP-run House failed to find any wrongdoing. He told Fox News last night that…

“I hope we begin serious, systematic, sober hearings, examining executive abuse, regulatory abuse, lawlessness, abuse of power. Whether it is IRS wrongly targeting citizens or the debacle of Benghazi and four Americans who lost their lives and why more was not done to save them, or whether it’s the lawlessness that pervaded Obamacare as the president and executive branch has tried to pick and choose which laws to follow. I hope we see serious oversight on those fronts.”

That’s a path that leads to increased animosity and the “perpetual conflict” that McConnell says he hopes to avoid. But with Cruz and Paul and Rubio amongst those in his caucus who are contemplating a presidential run, can McConnell prevent them from hijacking the senate for their own purposes? And will their purposes include attempts to impeach Obama as some Republicans and conservative pundits have already advocated?

The next two years are going to be a bumpy ride for both parties and, unfortunately, the American people. There is much that we cannot anticipate at this time. What we can safely assume is that the extremist, Tea Party wing of the GOP will deliver some histrionics and hilarity. And Fox News will cover all of it as if it were sober statesmanship. So buckle up, folks. And be glad that the ride is over in only two years.

Shameless self-promotion…
Get my book Fox Nation vs. Reality. Available now at Amazon.

20 thoughts on “Democrats And The Terrible, Horrible, No Good, Very Bad Day (For Republicans)”