The media hoax that is Fox News continues to embarrass itself with pathetic stunts aimed at glorifying their egomaniacal propaganda peddlers while debasing the practice of journalism. The latest example of this adventure in tabloid trivialities occurred today during a press conference held by New York City Mayor Bill de Blasio. 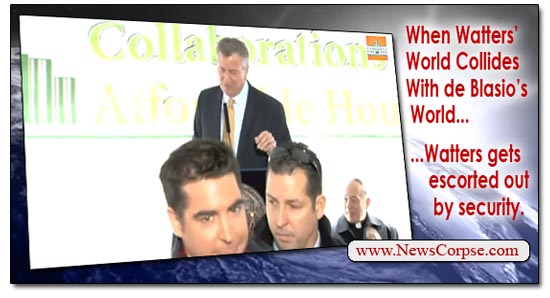 In the middle of the event Jesse Watters pops up and pretends that he has an actual question to ask. For those who don’t know him, Watters is a producer on The O’Reilly Factor and a practitioner of ambush journalism. He is also the “brains” behind the lie-riddled Fox Nation website. After being recognized by de Blasio, Watters demonstrated why is regarded as such an imbecile as he turned the press conference into a bitchfest with his whining about de Blasio’s refusal to grant O’Reilly an interview.

Shortly thereafter, Watters was escorted out of the press conference by security. And as it turns out, de Blasio’s office had previously responded to O’Reilly’s request with a rather gracious denial. His staff later tweeted evidence of it. But that isn’t even what makes this so stupid. A press conference is not the place to badger a public official about appearing on a cable news program. It is exceedingly rude and unprofessional to take the time of a busy mayor, and all of the legitimate reporters, just to try and book a guest on a program hosted by an angry and adversarial loudmouth who the mayor has no interest in accommodating.

But Watters isn’t concerned with professional behavior. He has never bothered to exhibit it in the past. His childish pranks have earned him the ridicule of his peers, and of Stephen Colbert who featured him in a hilarious segment earlier this year. And for more documented examples of Watters’ sleazy escapades in pseudo-journalism…