New York City was rocked this month by a grand jury’s refusal to indict a police officer who was caught on video choking a man to death over a few loose cigarettes. The shock this produced from across the country, and across the political spectrum, resulted in a long overdue discussion of race and the role of law enforcement in minority communities.

Many Americans are participating in this discussion, from protesters in the streets, to civil rights leaders, to victims advocates, to the President of the United States. And, yes, even celebrities have something to say on the matter. In fact, many of them are uniquely suited to comment because they have often traversed the economic extremes of bitter poverty and opulent wealth.

One of those is rapper/producer/mogul Jay-Z. He is a man who has risen from dire, and sometimes violent, circumstances in his youth to become a preeminently successful figure in entertainment and business. But when called upon by the governor of New York to help address the crisis facing his home town, Fox News predictably resorts to maligning him in the most racially offensive way possible. 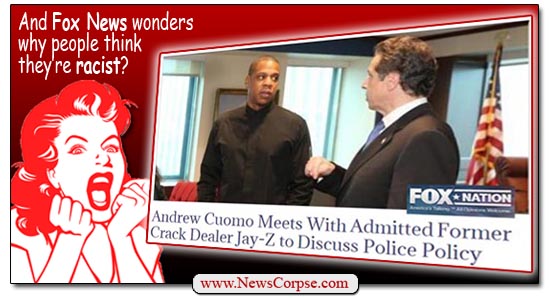 The lie-riddled Fox Nation, the community website for Fox News, posted an article sourced to their sister publication, Rupert Murdoch’s New York Post. The headline blared “Andrew Cuomo Meets With Admitted Former Crack Dealer Jay-Z to Discuss Police Policy.” Notice that nowhere in the headline did Fox note that Jay-Z was one of New York’s most prominent businessmen. Nor that he was a chart-topping creative artist. Nor that he has a long record of philanthropic service to the community. The only part of Jay-Z’s long resume that has any significance to the Fox Nationalists is that he had engaged in some criminal activity in his youth while growing up in a rough neighborhood where opportunities were scarce.

Jay-Z’s life story ought to be one that conservatives like those at Fox celebrate. Despite the harsh realities of his childhood, through hard work, creativity, and perseverance, Jay-Z beat the odds and achieved unparalleled success. He left behind what might have been a life of crime and heartache to become a respected member of society whose contributions have helped many others to find their own pathway to self-reliance.

If the only label that Fox can affix to a man with Jay-Z’s life experience is that of a drug dealer because he sold drugs many years ago, then News Corpse has some suggestions for a few of the people that Fox News employs and frequently fraternizes with. Here is how Fox should introduce the following people:

Until the repugnant bigots at Fox News apply the designations above to the criminals they favor, they ought not to demean someone who demonstrated the true meaning of redemption, a value that the faithful Fox evangelists pretend to revere. And the next time anyone on Fox complains about being called racist, they can refer to this example for the evidence of the charge.