In many ways I’m going to miss Michele Bachmann. She has provided an unending stream of hilarity during her brief tenure in Congress, and especially her epic run for the Republican nomination for President in 2012. 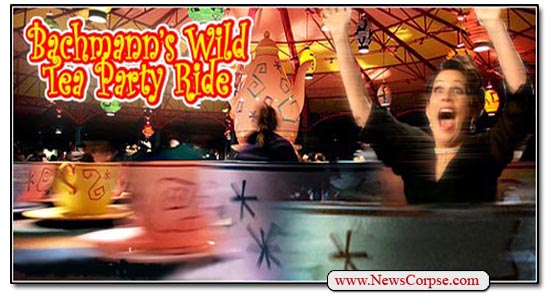 As a parting gift to comedians everywhere, Bachmann visited her pal Bill O’Reilly on Fox News (video below) to regale him with an account of her adventures at the White House Christmas party (which O’Reilly belittled as a “holiday” party). While bragging that attendance at the event was a high honor, she also complained about the less than respectful treatment she received from President Obama. The sad tale went something like this:

“I knew that this would be the last time that I would speak to the President as a member of Congress and I thought, I want to say something substant (sic) to him about what I think is the most consequential issue of the day. […]

“The president smiled, and he was fairly condescending and patronizing and said, ‘Well, it’s not quite that easy, Michele. But that’s okay,’ like I’m just, you know, an idiot and I don’t know anything.”

Had Obama intended to imply that Bachmann is an idiot it would have been entirely appropriate. She has proven it herself innumerable times. However, the President’s response was in no way disrespectful. It was pretty much all he could say under the circumstances. Bachmann confronted him with her comment in a photo line where many guests were waiting to greet the First Family. What did she expect him to do? Was he supposed to interrupt this photo-op to engage her in a protracted debate on a complex matter of national security standing there in the foyer? Perhaps she thought his eyes would light up with surprise and he would thank her for contributing such a brilliant idea that had never occurred to him. All things considered, Obama was rather polite after having been lobbied at a Christmas party to bomb another country.

It is that sort of laughably arrogant nonsense that we will miss in the coming years. Unless of course Bachmann signs up with Fox News and joins her comrade Sarah Palin in delivering comic relief (in the form of pseudo-political analysis) whenever she can score some airtime. But we will always have her past record of lunacy to cheer us up. Here’s a short summary of some of her classic moments: