Two years ago News Corpse published a collection of articles that documented the deception, propaganda, and outright lies disseminated by the Fox News community website, Fox Nation. It was dubbed “Fox Nation vs. Reality: The Fox News Community’s Assault On Truth.” Every chapter was fully verified by reputable sources and exposed the website for its shameful dishonesty and lack of ethics.

Now the second volume is available with more documented examples of Fox’s devotion to disinformation. It is titled “Fox Nation vs. Reality: The Fox News Cult of Ignorance.” If you purchased Volume I, you will want to add this to your library. It is a great resource for proving to your Fox-deluded friends and family what a den of deceit it is. And if you didn’t buy Volume I you can get Volume II and leap right into the fantastical world of Fox. 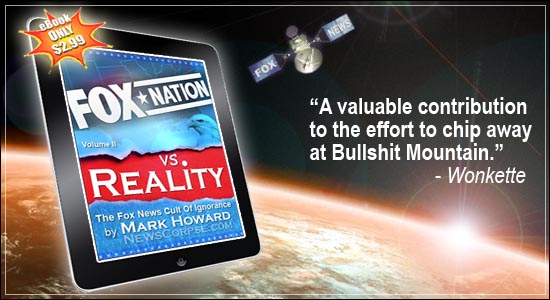 Get the ALL NEW 2nd volume of Fox Nation vs. Reality: The Cult of Ignorance.
Available now at Amazon.

Check out the reviews on Amazon for Volume I to get an idea of what previous reader have had to say. On a platform that is notorious for focused criticism it has maintained a 4-star average rating.

Purchasing Fox Nation vs. Reality is a great way to support this website and the work done here to reveal the malignancy of conservative media. Plus, it makes a wonderful Christmas/Holiday gift. And as always, your continued support and patronage is very much appreciated.

2 thoughts on “ANNOUNCING: Volume II of the Acclaimed Ebook “Fox Nation vs. Reality” Is Out Now”