The big news today that surprises no one is that Jeb Bush is seriously considering a run at the presidency in 2016. He says that he will launch an exploratory effort to test the waters, but that is a well known artifice that politicians commonly use to disguise or delay their true intentions. Bush has been hinting at running for some time and he is keenly aware that there will not be too many other opportunities. If he passes on 2016, and the next president serves two terms, Bush will be 70 before he could run again.

One of the reasons politicians seek to put off official announcements of candidacy is that they will begin take fire from all sides. Already the conservative wing of the GOP is lashing out against Bush. Another reason they delay announcing is that doing so brings on a whole new level of scrutiny. And Bush’s announcement has produced a perfect example of that risk. A report now circulating in conservative circles is questioning whether Bush was a drug user and dealer while attending prep school at Andover. 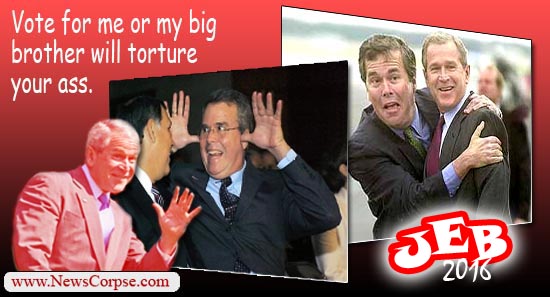 The allegations stem from an article written by John LeBoutillier, a former Republican congressman and currently a co-host of Fox News Channel’s Political Insiders. Under the title “The Jeb Bush Illegal Drug and Liquor Distributorship at Andover,” LeBoutillier wrote that…

“Jeb Bush and one other fellow student back then ran an illegal drug and liquor distributorship on the Andover campus. When the heat started coming down, Bush ratted out the partner to the school authorities and saved his own skin. Jeb got away with it, was never caught, never punished, graduated unscathed and went on to the University of Texas at Austin.”

If this account is true then Bush was not only engaged in unlawful activities, he was also an untrustworthy associate who will steamroll over others to avoid personal responsibility for his own conduct.

Some will say that these allegations are dredging up a distant past that holds no relevance to the present. After all, Bush went on to complete two terms as governor of Florida without any suspicion of substance consumption or commerce. But we must not forget the manner in which President Obama was harassed by wingnut critics who mined his past back to even his birth.

Conservative conspiracy theorists hatched plots that involved Obama’s parents fabricating a birth certificate to secure his U.S. citizenship. They accused him of being indoctrinated by early childhood influences from Muslim Madrassas to alleged communist subversives like Frank Marshall. They went into his college days at Columbia and Harvard to make tenuous connections between him and his lefty professors. They went totally bonkers over his attendance at the church of Rev. Jeremiah Wright. And, of course, they veritably salivated over reports of his youthful indulgence in marijuana.

If Obama’s drug use was considered an election issue by Republicans in 2008, then certainly Bush should be subjected to the same inquiries today. And as LeBoutillier noted in his article, even if the use of drugs were to be excused, Bush has been accused of trafficking, a far more serious offense. These kinds of tabloid assertions were a staple of the campaigns against Obama. But will the so-called liberal media apply the same standards to Bush?

Don’t count on it. The media is already demonstrating its hypocrisy by making a controversy out of Hillary Clinton’s wealth. They assert that due to her financial status she cannot relate to average Americans even though she was never wealthy until after leaving the White House. But they have yet to question Bush’s riches or their effect on his ability to relate, despite the fact that he was born to great wealth.

Similarly, the media is obsessed with the matter of dynasty. However, the Clinton’s hardly qualify as a dynasty since there is no multi-generational component to their public service. It is simply Bill and Hillary. But Bush is the brother and son of a president, and the grandson of a senator, and the father of an officeholder in Texas. That’s four generations of Bushes in politics. Which is more than the Kennedys. Nevertheless, the media treats the two families the same. Not even Jeb’s mother does that. She was famously quoted saying that “We’ve had enough Bushes,” when asked to comment on a prospective Jeb candidacy.

Personally, I don’t put much stock in the charges against Bush. Even though the source is more reliable than the fruitcakes that were cooking up plots about Obama, there should be more evidence and corroboration before anyone makes decisions based on them. I am also not a fan of ancient history being exploited as a weapon against people whose current lifestyles do not exhibit any misbehavior. However, I do believe that the press should be, as they say, fair and balanced, and if they go after Democrats like Obama and Clinton, then they need to do the same to Bush and any other Republican candidate. That does not seem to be the case so far.