Hackers that stole private information from Sony Pictures and released some of it publicly caused an enormous amount of embarrassment and significant damage to the studio’s relationships with their employees and business partners. But what came next is far more troubling than embarrassment. The hackers behind the data theft have now threatened to attack movie theaters that show the film.

“We will clearly show it to you at the very time and places “The Interview” be shown, including the premiere, how bitter fate those who seek fun in terror should be doomed to.
Soon all the world will see what an awful movie Sony Pictures Entertainment has made.
The world will be full of fear.
Remember the 11th of September 2001.
We recommend you to keep yourself distant from the places at that time.
(If your house is nearby, you’d better leave.)
Whatever comes in the coming days is called by the greed of Sony Pictures Entertainment.
All the world will denounce the SONY.”

The one thing that this message makes clear is that whoever wrote it is a moron. After all, how will the world see what an awful movie it is if, as the terrorists wish, nobody sees it? It is idiocy like this that makes me tend to discount reports that North Korea is behind the hack or the threats. It sounds much more like a disgruntled ex-employee (or a group of them) who is seeking personal revenge. The fractured English looks deliberate as they managed to correctly punctuate the contraction “you would” while elsewhere emulating the syntax of Yoda.

Particularly revealing is the reference to greed as what offends the hacker. If the North Koreans were responsible it would be the perceived insult to their leader, Kim Jong-Un that would have incited them. But even that is a stretch because the film makes fools of the Americans, which is something that the North Koreans would welcome. And why would North Korea suddenly get so upset by this low-brow comedy? Why wouldn’t they have long ago threatened to blow up all of the media outlets that have been harshly critical of their country? Why wouldn’t they have aimed their wrath at hundreds of other more significant criticisms? Ann Coulter and Sean Hannity have said far worse things about North Korean than this film does.

However, now that this has devolved to terrorist threats for whatever reason it is an utterly unacceptable demand. If Sony capitulates to this threat they open the door for future terrorists to effectively control what American filmmakers (and any other product manufacturer) can produce and distribute. And, of course, that also means that the terrorists control what American citizens are permitted to see or buy. That is a power that must not be granted to the cretins who plotted this affair. And Sony has it within their power to thwart them. 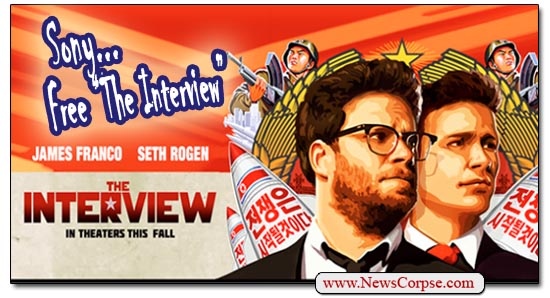 Some theaters have already decided to pull the film from their screens. Sony has told all exhibitors that they will be allowed to do so. Consequently, the film’s profit potential in the theatrical marketplace has been effectively ruined. So why doesn’t Sony just take the next step and announce that they will make the film available for free to everyone. They can release it themselves on the Internet. They can distribute it to cable television operators for free broadcast.

By doing this they keep the means of distribution in their own hands. They can inset advertising to generate revenue. And the ad rates could probably be unusually high due to the abnormally strong level of interest that this film will likely have. As a result, whatever motives the hackers had to suppress the film will have not only been thwarted, it is very likely that more people will see it than if none of this had occurred.

So what do you say, Sony? Do you want to allow terrorists to dictate what Americans can produce and consume? Or do you want to turn a horrible situation around to slap the perpetrators in the face and deter future attempts of this sort of extortion? This solution denies the bad guys a victory at the same time as it rescues the studio from a certain loss.