Six weeks ago an election concluded that brought what every Republican, and many Democrats, thought was the deathblow for the Obama administration. There was no phrase that was uttered more often than “Lame Duck” as pundits rushed to write the epitaph of Obama’s presidency and agenda. They were convinced that the Obama era was dead and, with apologies to Monty Python, it had…

“…passed on. It is no more. It has ceased to be. It’s expired and gone to meet it’s maker. It’s a stiff. Bereft of life. It rests in peace. It’s pushing up the daisies. It’s metabolic processes are now history. It’s off the twig. It’s kicked the bucket. It’s shuffled off it’s mortal coil, run down the curtain and joined the bleeding choir invisible. This is an ex-presidency.” 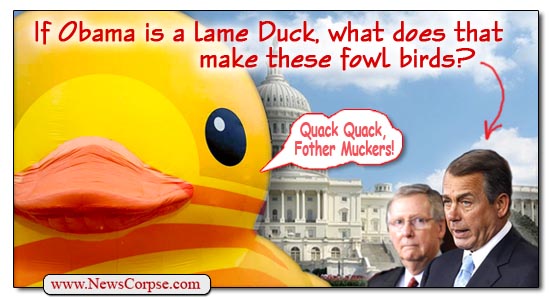 Well, in the subsequent forty-two days the President has demonstrated a stubborn resistance to complying with the conventional wisdom. He has defied his critics’ forecasts of an untimely demise, as well as their conviction that he is incapable of leadership. Here is a brief summary of some of the achievements that have come to pass since November 5, 2014, beginning with an historic announcement today:

In addition to the above, Obama has also presided over record enrollments in the second year of ObamaCare, and the deflating of Russia’s economy. And all the while the U.S. economy is performing better than any other major nation, and most indicators are firmly in positive territory.

Of course, there is still much room for improvement, but that cannot be achieved without the cooperation of Congress. There is not likely to be much of that in the next couple of years, but Obama has proven that he is able to attend to the interests of the American people even when Congress refuses to do so. And the 2016 cycle is shaping up to heavily favor Democrats.

In fact, 2016 holds decidedly bad news for Republicans and their new senate majority. The GOP will be defending 24 seats, as compared to only 10 for the Democrats. Nine of the those GOP seats are in states won by Obama in 2012. So are all of the Democratic seats. With a larger and more representative electorate it is almost a certainty that the senate will flip back to the Democrats.

It will be interesting to see where we go from here as the new congressional session begins next month. What we already know is that with Republicans in charge the Congress has set a new record for laziness. It has spent more time on vacation than working (239 total vacation days in 2014). Plus, it was the least productive session in history. It took that trophy from the session just prior.

Much of the blame has to be laid at the feet of John Boehner, the Tea Party, and the GOP’s inability and genetic aversion to governing. But if anyone is still holding onto the belief that Obama has become an irredeemable lame duck, the evidence of the past six weeks ought to shake that conviction. It is clear that Obama has no intention of being hobbled by an antagonistic Congress that cares more about their own grasp on power than they do the welfare of the people they are supposed to representing.

10 thoughts on “So You Thought President Obama Would Be A Lame Duck, Did You?”