The still unfolding saga of the hacking into Sony’s network has produced a war of words between American intelligence agencies that accuse North Korea of the intrusion, and the North Koreans who applaud the act but insist they had nothing to do with it. After declining to release the film “The Interview” that was ostensibly what incited the hacking, Sony reversed themselves and put the movie out in theaters and online. This further inflamed North Korea who lashed out with an openly racist attack on President Obama saying…

“Obama always goes reckless in words and deeds like a monkey in a tropical forest.”

Comparing the first African-American president of the United States to a monkey was surely not an accidental slip of the tongue. It was a deliberate, if juvenile, attempt to demean and ridicule Obama. However, the repugnant and racist monkey reference is nothing new to Obama haters in America. The juvenile Tea Party has been rife with offensive images and signs at their rallies that made the very same association. 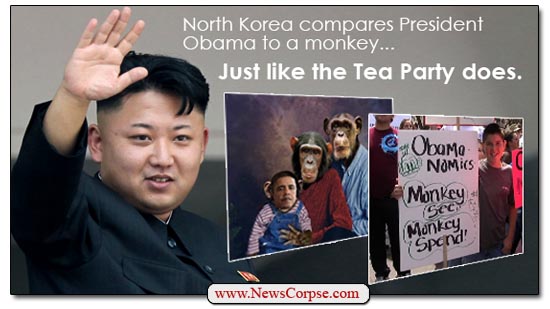 As if to emphasize the contemptuous disdain for Obama, the folks at Fox News posted an item on their community website, Fox Nation, about North Korea’s slur. This set off a sadly predictable flurry of hate speech by their readers that brings into focus the ideological camaraderie between America’s enemies and its own extremist right-wingers. 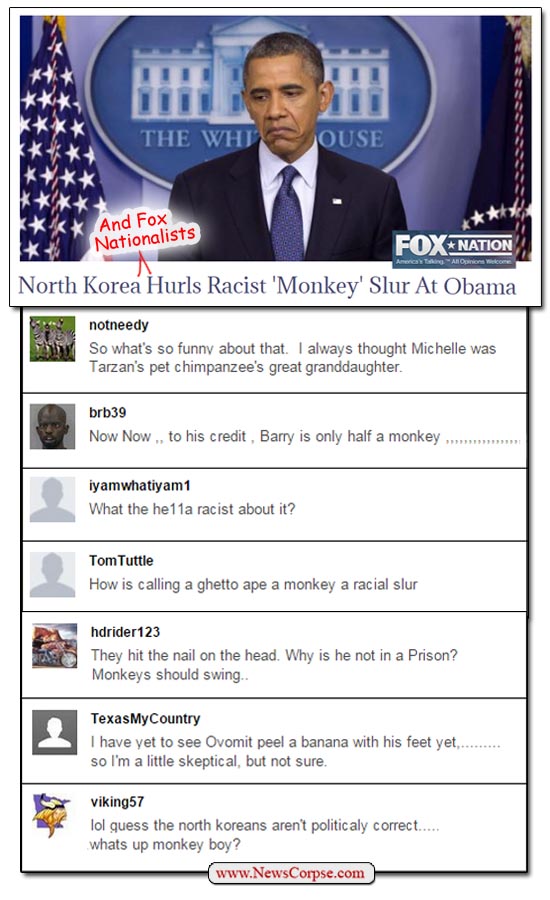 When Vladimir Putin was criticizing Obama over the Ukraine situation, many Fox News pundits and contributors (including Sarah Palin, Tucker Carlson and Ben Carson) responding by virtually nominating him as the Republican presidential candidate. All it takes to win the hearts and minds of Teabaggers is to insult America’s president. So I guess it won’t be long now until they add Kim Jong-Un to the ticket.

14 thoughts on “What Does North Korea, Fox News, And The Tea Party Have In Common?”