You gotta love it when conservatives make such fools of themselves that it’s impossible to tell the difference between satire and reality. An epic and hilarious example of this is the article published by the ultra right-wing blog American Thinker (a name that must have been chosen for its irony). 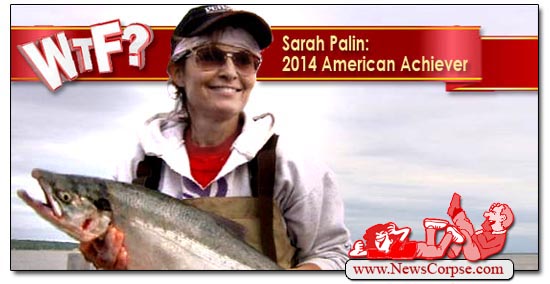 The alleged “Thinkers” have chosen Sarah Palin as their recipient of the 2014 American Achiever honors. Now, you may be wondering what in hell Palin achieved to deserve that recognition. She hasn’t done a single thing since resigning after half a term as governor of Alaska other than her laughable reality programs and some embarrassing segments on Fox News. Well, the Thinkers spell out specifically what she managed to achieve:

“It would be the height of churlishness for even the most inveterate leftist to deny the import of someone who made Time magazine’s “100 Most Influential People” list, and then the Smithsonian Institution’s “100 Most Significant Americans Of All Time” list. Both affirmations were earned by former Alaska governor and vice-presidential candidate Sarah Palin.”

Forgive my churlishness, but this inveterate leftist has no problem denying Palin’s import. Particularly when the examples of her achievements in 2014 include making a Time magazine list that was published four years ago in 2010. Yep, that’s the listing to which the Thinkers linked. And the tribute in Time was written by that bastion of modern political relevance, Ted Nugent.

They were a bit more on target chronologically with the Smithsonian list that was at least published this year. However, the list was more a fanciful exercise in algorithmic celebrity than actual historical significance. The listees were selected by a process of calculating references, links, and page views in Wikipedia. The authors even noted that their list “has less to do with achievement than with an individual’s strength as an Internet meme.” And the Thinkers cited this as evidence of achievement. What were they thinking? Also making the list were Charles Manson, L. Ron Hubbard, And Secretariat.

The only other notable achievement cited by the Thinkers concerned Vladimir Putin’s support for Ukrainian rebels. But what they regarded as an achievement was a speech Palin made in 2008 that they say predicted Putin’s actions. First of all, Palin’s six year old speech, that was surely written by John McCain staffers, is hardly eligible to be considered an achievement in 2014. And secondly, it didn’t predict anything of the sort that she and the Thinkers have been boasting about.

It takes a special kind of stupid to turn the above irrelevancies into an honorarium. But with so few actual examples of conservative achievements, it isn’t surprising that they need to make things up in order to have something to talk about. It’s not like they can brag about Jeb Bush or Ted Cruz or Michele Bachmann or Rand Paul or Rick Perry. Their desperation is on display, so they swept up some dust balls to elevate their fading Tea Party princess and submitted that as a model of achievement. To which all this churlish leftist can say is “Thanks for the laugh.”