“When will those uppity Obamas learn their place? It’s bad enough that they have occupied the “White” House, but now they are invading the exclusive, private establishments that used to be reserved for “regular” (i.e. rich, white) Americans.”

That’s the message that Fox News is sending with their segment Friday on “Your World with Neil Cavuto.” (Whose world?) Cavuto was reporting that President Obama and the First Lady had dinner at a pricey restaurant in Hawaii where they are spending their Christmas and New Years holiday. He spent several minutes batting around the notion that it was somehow unseemly for them to enjoy an evening out where they might mix socially with their superiors. 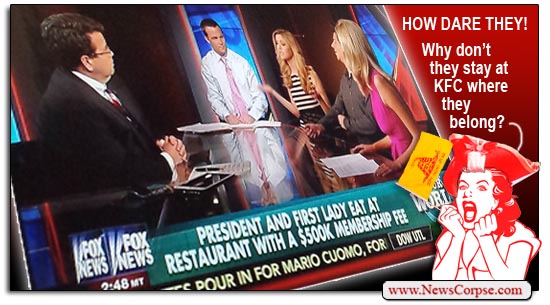 There was an effort to spin the story as a derogatory example of the President appearing out-of-touch or insensitive to the plight of less fortunate Americans who cannot afford such extravagances. But since there was never a similar disdain for white Republicans who commonly patronize exclusive clubs (even those that prohibit blacks and Jews), the criticism rings hollow. What’s left is a transparent implication that the Obamas ought to stick to places that are more fitting for their class. You get the distinct impression that Cavuto and company believe that Burger King or KFC would be a more appropriate eatery for the First Family.

It wasn’t just Fox News that noticed the Obamas stepping out. WorldNetDaily, Breitbart News, and the Daily Caller were among the other right-wing rags that were offended by this choice of gourmet feasting. And of course, it was also featured it on the Fox Nation website. Even more “mainstream’ outlets like The Hill and Mediaite ran with it. But the hypocrisy only validates the widely circulated meme about Fox News as being “Rich people paying rich people to tell middle-class people to blame poor people.” Why the President and his family cannot enjoy an evening of fine food and drink is never explained.

This offensive and racist reporting is typical of the right-wing media. A few months ago Fox Nation published an item wherein wingnut screecher Mark Levin made a big deal about the Obamas vacationing at Martha’s Vineyard, which Levin falsely called “the whitest place on Earth,” and therefore no place for our African-American president. But sadly, it only took one day into the new year for this bigotry to be loosed on the air by Fox. That’s a troubling forecast of things to come as we head into another highly charged season of presidential politics.