On yesterday’s broadcast of Countdown on MSNBC, host Keith Olbermann featured a story about News Corpse. I couldn’t be more proud. 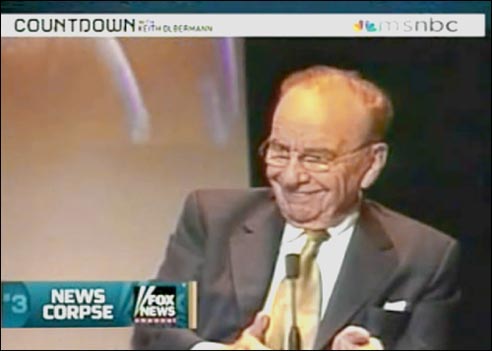 Actually, it was a story on the $1 million donation from Rupert Murdoch’s News Corp to the Republican Governor’s Association. Although I did report on this unprecedented bankrolling of GOP candidates by a major pseudo-news organization, Countdown’s segment was an interview of Media Matters’ Eric Burns on the subject.

It was an informative and entertaining discussion that hit on most of the salient points. I would have liked it if they had also pointed out that some of the funds received by the RGA would likely be stuffed right back into Murdoch’s pocket via ads they purchase on Fox News and in the Wall Street Journal, but in the end I was just jazzed to see my web site name on the screen for several minutes.

Keith should be grateful that I am not as litigious as Murdoch, whose company is presently harassing the folks at Skype because they think the name is “confusingly similar” to their Sky satellite television service. I’m still waiting for Murdoch to come after me.