This morning on Fox and Friends there was another ridiculous, fear mongering, discussion of the non-mosque that is not at ground zero. In this farcical parade of ignorant banter the hosts were aghast at the notion that some of the funds for the proposed Islamic community center at 51 Park Place might come from sources in Saudi Arabia.

Brian Kilmeade: He [Imam Rauf] is going to be looking for fundraising to Muslim nations around the world.

Alisyn Camerota: If the 9-11 families are worried now and are concerned and feel hurt about this mosque, imagine if Saudi Arabia were to give some of this $100 million. … Saudi Arabia, where the majority of the hijackers, the terrorists came from. You can only imagine how much the victims’ families would speak out in that case.

Exactly! You can only imagine how much the victims’ families would speak out if Fox News were to get millions of dollars from Saudi Arabia, where the majority of the hijackers, the terrorists came from. 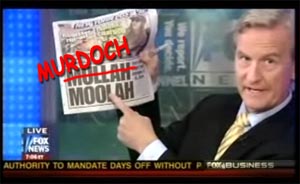 Oh, wait a minute…..Fox News does get millions of dollars from Saudi Arabia. In fact, the biggest shareholder of News Corp stock outside of the Murdoch family is Prince Al-Waleed bin Talal of the Saud family.

One has to wonder why it would be such an abomination for what is, in effect, an Islamic YMCA in lower Manhattan to be partially funded by Saudis, but no outrage is in order for an international news organization whose top investors include members of the Saudi royal family.

Rupert Murdoch has already shown that he is susceptible to influence by financial considerations and relationships. He agreed to let the government of communist China censor his news reporting in order to gain access to their markets. He acquiesced to a demand that MySpace China display a link on every page for users to report “inappropriate information” to the authorities (I wonder how many Chinese dissidents disappeared as a result of that little feature). He also altered stories on protests in France at the request of the very same Prince who is his business partner:

Al-Waleed: I picked up the phone and called Murdoch…(and told him) these are not Muslim riots, these are riots out of poverty. Within 30 minutes, the title was changed from Muslim riots to civil riots.

It seems to me that there is much more to fear from a worldwide media conglomerate caving in to the demands of foreign powers, than from a single interfaith social club in an old Burlington Coat Factory building in New York. And if the morons on Fox and Friends want to spin scary tales about imaginary terrorists, they would find more material in their own building than in the one a few blocks from ground zero.