On MediaBuzz, the Fox News program dedicated to reviewing the press, anchor Howard Kurtz took another opportunity to belittle President Obama and the YouTube personalities that interviewed him following the State of the Union Address. This is apparently a sore spot for conservative media dinosaurs like Kurtz who think that it is “beneath the dignity of the office to be hanging out with some of these YouTubers.” As noted in a previous article, the jealously and hypocrisy of the entrenched conventional media was exposed by their arrogant dismissal of a forward-thinking politician who recognizes the value in relating to a new generation of Americans on their own turf.

But Kurtz wasn’t finished. He took his criticisms to his own Sunday program to lay into the President and the YouTubers again. This time he focused on a distinction between the YouTube personalities and mainstream entertainment programs on television saying that he is “fine with Obama going on Ellen, The View, Colbert, but isn’t this sort of like the low-rent district?” 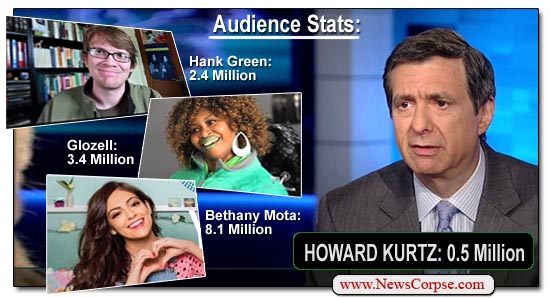 First of all, it wasn’t too long ago that going on shows like Ellen was looked down upon in the same way that Kurtz is demeaning YouTube. Bill Clinton’s appearance on Arsenio Hall was widely mocked by the dino-press. The same is true when politicians began to take cautious steps onto late night shows like Leno and Letterman. In most cases they still complain that such appearances trivialize the political guest.

Secondly, for Kurtz to insult the YouTubers as “low-rent” displays a giant, family-sized bag of chutzpah. His program on the journalistic wasteland of Fox News has an audience of about half a million viewers. Fox News Sunday, pulls in about 1.3 million. But the YouTube trio who sat with Obama last week reach a much bigger audience. Hank Green’s Vlogbrothers has a YouTube subscriber base of 2.4 million. The flamboyant Glozell draws 3.4 million. And Bethany Mota pulls in a whopping 8.1 million people. That’s about four times the viewers of Bill O’Reilly.

In Kurtz’s MediaBuzz segment he ran a brief video that featured only a few moments of fun or silliness, and he implied that they were representative of the whole of each interview. That is a deliberate and bald-faced lie. Many of the questions asked of the President were as substantive and probing as any that the more “professional” reporters would have asked. For instance…

It would be difficult for Kurtz to honestly find fault with these lines of questioning without condemning his own colleagues who have asked many of the same types of questions. But instead he chose to air some laugh lines and pretend that’s all that occurred. And his panel was no better. Jonah Goldberg of the ultra-rightist National Review whined that Obama “only likes to talk to people who think he’s awesome.” That will come as some surprise to Fox’s Bill O’Reilly and Bret Baier, who have both interviewed Obama. Either Goldberg has early onset Alzheimer’s or he is purposefully misleading. As for examples of profound inquiries by Fox News reporters, this morning Chris Wallace asked Obama’s Chief of Staff if because of the election results in November “Doesn’t the President need to scale back his agenda to work with Republicans?”

Really? So the President should abandon his principles and capitulate to a party that won a majority in the lowest turnout election in 70 years? And when did Wallace ever ask Republicans to scale back their agenda in 2012 or 2008, after big Democratic victories? In fact, one of the first things Wallace said after the first inauguration of Obama was to question whether he was actually president because Chief Justice Roberts flubbed the oath of office. Then GOP senate leader Mitch McConnell declared that his top priority was to make Obama a one-term president. And Rush Limbaugh said “I hope he fails.” Apparently no agenda scaling back was necessary for the Republican losers.

Before Kurtz maligns others as being in a “low-rent district” he should assess the value of his own property. What he will find is a petty, biased, plot of fear mongering and racism. It’s a tract that Fox News has spent years developing.