This weekend Rep. Steve King of Iowa, who maligned immigrants as drug mules who “have calves the size of cantaloupes,” and supports dog fighting because laws that protect animal welfare are, “exactly what our founding fathers wanted to avoid,” hosted his annual Iowa Freedom Summit with a star-studded cast of prospective GOP presidential candidates. And Fox News was there to capture every thrilling moment. 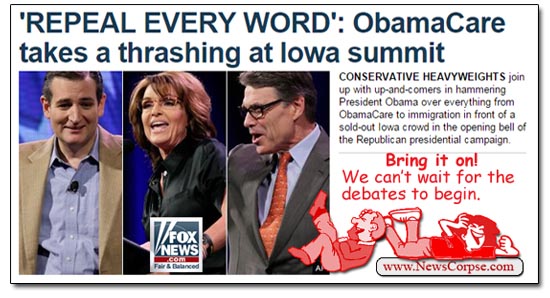 For some reason Fox thinks it is breaking news that Ted Cruz, Sarah Palin, and Rick Perry said mean things about ObamaCare. Their definition of “thrashing” must be “to mutter childish slogans and stomp your feet.” And they continue to ignore the fact that their calls to repeal it have failed repeatedly, including when the Supreme Court upheld it. Also forgotten is any mention of what they would replace it with as they throw millions of Americans off of their insurance plans.

The timing of this event couldn’t have been better as this week saw the advancement of several possible candidacies, including Sarah Palin and Donald Trump, both of whom were in attendance. Palin distinguished herself by posing with a sign that said “Fuc_ Michael Moore,” as part of her campaign to defend the box office hit, American Sniper. She addressed the same subject in her speech when she further demonstrated her grown up, Christian values by shouting “Screw the left in Hollywood.” Somebody might want to tell her that Hollywood is responsible for the movie she is defending. Note to GOP: She aint running.

The Donald was his typically arrogant, Narcissistic self. He insulted fellow Republican Mitt Romney (a no-show) saying that he would not be a good candidate because “he choked” last time around. He also raised the tender issue of Romney’s 47% remarks and said that his RomneyCare in Massachusetts was enough to disqualify him from further consideration. He also slammed Jeb Bush (another no-show) because of his name saying that “The last thing we need is another Bush.” He may get some agreement from Democrats on that. And of course, he bragged about himself. Even though there is little chance that he will enter the race, like every other time he has pretended to run, he is just promoting his own interests and image (like Palin).

Dr. Ben Carson took the stage to further prove that he must have have missed every class in college except brain surgery. He began by complaining that he doesn’t believe in taking healthcare and “putting it in the hands of the government.” Setting aside the fact that ObamaCare doesn’t do that, he expresses his preference for putting healthcare in the hands of greedy, soulless corporations. And he actually said that even if it worked he would oppose it. Um, OK. Then he declares that immigrants only come to America because it is so attractive. Therefore, he proposes that that be reversed. That might actually work. Make America less attractive and nobody will want to come. However, it’s a terrible campaign slogan, and besides, George Bush already tried that.

The comedy extravaganza continues with featured guests like Ted Cruz, Mike Huckabee, Chris Christie, and Rick Santorum. The prospective candidates from the so-called “establishment” wing of the party (Mitt Romney, Jeb Bush, Rand Paul, and Marco Rubio) all declined to attend. That may cost them some Tea-fection when the race begins in earnest. But from this small glimpse into the nascent campaign season, it is bound to be a bountiful cornucopia of laughs. Just wait for the debates to get started.

4 thoughts on “Free To Be Dumb: The Republican Iowa Freedom Summit Lives Up To Its Billing”