The much anticipated speech by Israeli Prime Minister Benjamin Netanyahu before a joint session of Congress has come and gone leaving a notable aroma of anti-climax. After being hailed by many in politics and the press as an historic occasion, there was nothing of substance revealed in the address. It turned out to be a tale of a dystopian future that mimicked the doomsday rantings of Glenn Beck, complete with caliphates and the collapsing of civilization.

John Boehner’s invitation to Netanyahu violated decades of protocol and was a blatantly political slap at President Obama. Republicans heralded the speech as a vital moment to embrace an important ally. In fact, they implied that any opposition to the controversial appearance was tantamount to being anti-Israel and even anti-Semitic (as Andrea Tantaros of Fox News opined twice). The American right is shamelessly infatuated with Netanyahu and regard him as a superior model of leadership to our own president who was popularly elected twice.

Netanyahu enjoys the admiration of conservatives who favor posturing for war over diplomacy. They have elevated him to hero status and fantasize about having him replace Obama in the White House. Sarah Palin has gone even further by seeking to profit from her crush by selling t-shirts emblazoned with his picture and the oath “I Stand With Bibi.” 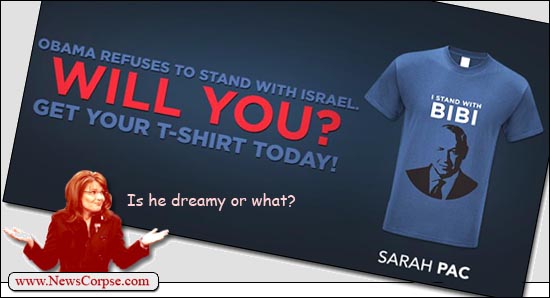 However, these conservative Bibi disciples may come to regret their insistence that loyalty to the current Israeli Prime Minister (a war-mongering conservative) is equivalent to loyalty to Israel. That’s because in a couple of weeks there may very well be a new Prime Minister with a very different worldview. The Guardian reports that…

“Binyamin Netanyahu’s campaign for re-election for a fourth term as Israel’s prime minister appears to be stumbling, with recent polls suggesting he is marginally behind his biggest challenger, Isaac Herzog.”

Herzog is the leader of Israel’s Labor Party and has a more liberal, inclusive political philosophy. He represents a coalition that seeks peace through cooperation. He is a lawyer, a member of the Knesset (Israel’s legislature), a former IDF intelligence officer, and is every bit as determined to insure Israel’s security as Netanyahu. But he believes that a two-state solution negotiated and enforced with neighbors in the region is the way to end the decades-long hostilities.

If Herzog prevails in the March 17 election, it will be interesting to see if the right-wingers in the U.S. continue to regard the Prime Minister as the official proxy for all things Israel. Will they invite him to speak before a joint session of Congress? Will they hang on his every word. Will they repudiate as disloyal anyone who dares to disagree with him? Will they hawk t-shirts with his smiling face and promises to stand with him?

It doesn’t take much courage to slide out on a limb and predict that the wingnut contingent would not give Herzog the same measure of respect that they give to Netanyahu. And you might wait a long time to be able to buy a Herzog t-shirt from Sarah Palin’s PAC. So while Israel would benefit enormously from the election of a Labor Party majority, There’s another reason why Americans should root for that outcome. Because it would just be so much fun watching Republican pols and pundits squirming to validate their disdain for an Israeli PM after demanding allegiance to their hero Netanyahu.