For most of the past week the news cycle has been decidedly unfavorable to conservatives. Bill O’Reilly’s reputation is in tatters after several examples of his lying to stroke his own ego were revealed. The congressional failure to pass a funding bill for the Department of Homeland Security has exposed the GOP as inept at governing. And the annual CPAC circus has given right-wing Republicans more airtime than usual to embarrass themselves.

Consequently, Fox News is fishing for a scandal to get frantic over to fill the void, and they think they found one. 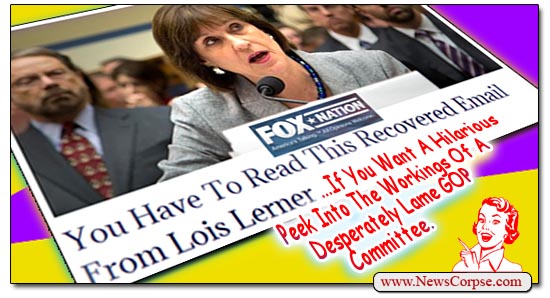 Actually, they are just warming over an old scandal that they hope has enough pus left in it to ooze out some more wingnut bile. Featured on the Fox News community website Fox Nation is an item with the tantalizing title “You Have To Read This Recovered Email From Lois Lerner” Lerner, you may recall, is the whipping gal of the GOP’s House Committee on Heckling Obama. The budding scandalette revolves around the Treasury Department’s disclosure that 32,000 emails were found on backup tapes. Not mentioned by Republicans on the committee is that the emails may all be duplicates that the committee already has.

What the Fox Nationalists chose to highlight was a tweet by the committee, that is filled with gleeful anticipation. It said “If you can believe it, here’s an actual email sent by Lois Lerner:” The content of the “unbelievable” email reads “No one will ever believe that both your hard drive and mine crashed within a week of each other. Life is strange.”

The implication is that Lerner was communicating with a colleague about their covert conspiracy to conceal an alleged plot to subject conservative organizations seeking non-profit status to greater scrutiny. After endless hearings and hyperbolic exclamations of unveiled “bombshells,” they never found any evidence of wrongdoing. Nevertheless, the Republican smear machine rattled on. And now, once again, they are crowing about some investigative victory. The problem is that they haven’t got the brains to put together a coherent case of misconduct.

The new email that they are so excited about is not a confession of any sort. If anything it exonerates Lerner and her ePenPals. With language like “life is strange” she is plainly expressing genuine surprise that the hard drives failed at around the same time. That proves that it wasn’t a planned scheme to destroy evidence. Lerner certainly would not write something incriminating in an email right after supposedly trashing hard drives to eliminate incriminating emails. And if further proof is needed, the email in question is dated June 29, 2011, two years before there was any investigation of the department’s activities. So there wouldn’t be any reason for Lerner to be tampering with correspondence that no one was looking for, and wasn’t considered to be evidence of anything.

That’s how lame this new “discovery” that “you have to read” is. It’s pathetic that the Oversight Committee would furiously tweet this utterly pointless message. And it is similarly ludicrous that Fox News would regurgitate it as if it had some significance other than to manufacture suspicion. But that’s really all they have, so they’re going with it.

8 thoughts on “Fox Nation vs. Reality: You Have To Read This (Irrelevant) Email”