While much of the media is obsessing over emails sent by former Secretary of State Hillary Clinton while she was serving the country, another letter has stirred up some controversy over whether Republicans in Congress have engaged in treason. 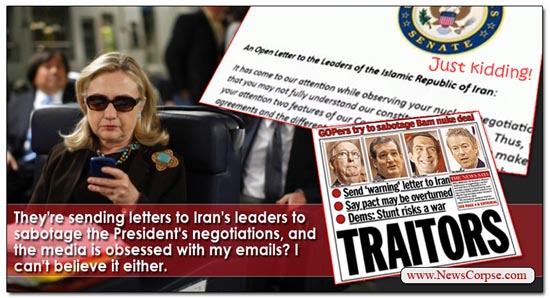 Freshman senator and Tea Party crush Tom Cotton of Arkansas managed to get forty-seven of his senate colleagues and a couple of GOP presidential hopefuls to sign a letter warning Iran not to take President Obama seriously with regard to negotiations on Iran’s nuclear ambitions. The letter took a decidedly condescending tone that presumed its recipients were unfamiliar with international diplomacy. Cotton offered to school them saying that…

“It has come to our attention while observing your nuclear negotiations with our government that you may not fully understand our constitutional system. […] We will consider any agreement regarding your nuclear-weapons program that is not approved by Congress as nothing more than an executive agreement between President Obama and Ayatollah Khamenei. The next president could revoke such an executive agreement with the stroke of a pen and future Congresses could modify the terms of the agreement at any time.”

Unfortunately for Cotton and his co-signers, Iran’s foreign minister was better prepared on these subjects than they were. Their misguided attempt to wedge their way into the negotiations was inappropriate, foolish, and possibly illegal. And worse, it probably had the opposite effect of what they were aiming for. Rather than undercutting Obama’s credibility, the letter served to more broadly discredit Congress and the nation. Iranian Foreign Minister Mohammad Javad Zarif scolded Cotton & Co. saying “In truth, it told us that we cannot trust the United States.” He went on to say that the letter’s signatories…

“…not only do not understand international law, but are not fully cognizant of the nuances of their own Constitution when it comes to presidential powers in the conduct of foreign policy. […] I should bring one important point to the attention of the authors and that is, the world is not the United States, and the conduct of inter-state relations is governed by international law, and not by US domestic law. The authors may not fully understand that in international law, governments represent the entirety of their respective states, are responsible for the conduct of foreign affairs, are required to fulfill the obligations they undertake with other states and may not invoke their internal law as justification for failure to perform their international obligations.”

Zarif also pointed out that any attempt by a future Congress or President to renege on an agreement of this sort would be a violation of international law. However, compliance with the law may not be uppermost in the minds of this letter’s authors. By writing and sending the letter they may have violated a domestic law known as the Logan Act that forbids unauthorized citizens from negotiating with foreign governments.

Subsequent to the letter’s publication, the Republicans associated with it have been pilloried for their both their ignorance of international diplomacy and their Constitutional role in negotiating inter-state agreements. Some in the GOP are already distancing themselves from the embarrassing letter, including Sen. Bob Corker, the chairman of the Senate Foreign Relations Committee. But the most peculiar response came from some unnamed GOP aides who are now trying to characterize the whole affair as a joke. Daily Beast reports that…

“Republican aides were taken aback by the response to what what they thought was a lighthearted attempt to signal to Iran and the public that Congress should have a role in the ongoing nuclear discussions. Two GOP aides separately described their letter as a ‘cheeky’ reminder of the congressional branch’s prerogatives.

‘The administration has no sense of humor when it comes to how weakly they have been handling these negotiations,’ said a top GOP Senate aide.”

Lighthearted? Cheeky? Someone is going to have to explain the punch line in this to me because writing to Iran’s leaders to inform that they cannot trust the President of the United States hardly seems like comedy or even playful banter. What’s more, the suggestion that the President has no sense of humor is puzzling. Do they think that the prospect of a nuclear-armed Iran is something that Obama should be joking about? Is their assertion that he is handling these negotiations weakly a laughing matter?

The truth is that if Obama were to have injected humor into this situation in even the smallest way, the GOP would be renewing their calls for impeachment. [Actually, Laura Ingraham has already done so on Fox News Tuesday night with Greta Van Sustern] This shift to portraying the letter as a joke is just a lame attempt to get out from under the bad publicity it has created for the imbeciles who signed it. But it also reveals that Republicans are not averse to endangering sensitive negotiations, and the security of the nation and the world, in order to satisfy their psychotic hatred of our President. And that is what they regard as patriotism.