Objective viewers have long ago concluded that Fox News is not, and never has been, a legitimate news network. They began as a project by right-wing propagandist Rupert Murdoch and Republican media strategist Roger Ailes to spread disinformation and promote GOP politicians. And for the past 17 years they have carried out that mission with a roster of rabidly partisan hosts broadcasting provable lies.

Now, with the publication of the “Hollywood Reporter’s 35 Most Powerful People in New York Media 2015,” Roger Ailes, the Fox News chairman and CEO, has confessed that his network, despite its name, is not actually in the news business. Belittling his cable news competitors CNN and MSNBC, he gave the Reporter a statement revealing his true professional aspirations:

“In fact, Ailes, 74, no longer views those networks as rivals. ‘We’re competing with TNT and USA and ESPN,’ he says.”

So according to Ailes, he regards channels that are plainly entertainment and sports as his competition, not other news outlets. That is not really all that surprising if you have examined the Fox programming model with any depth. News Corpse has previously analyzed how Fox incorporates methods that are generally reserved for entertainment programs. As recently as last month we published a description of the hyper-dramatization Fox injects into their presentation:

“Fox News has redefined television journalism by fundamentally transforming it from an information medium to an entertainment medium. They dress up their pseudo-news segments in the same melodramatic packaging that entertainment outlets use: conflict, scandal, mystery, and hyper-charged emotions including hero worship and fear. Fox employs flashy graphics and attention-grabbing audio whooshes and gongs to decorate their reports that are presented as ‘ALERTS’ regardless of the news value. And always there is sex. Fox’s roster of hosts has more former beauty pageant contestants that journalists. And they aren’t shy about putting their ‘talent’ in revealing clothes and camera angles. In fact, Fox CEO Roger Ailes demands it. As for news, Fox’s concentration on tabloid thrill-fiction like Benghazi and Obama’s birth certificate is the news equivalent of porn.”

Ironically, Fox News was labeled as an entertainment channel way back in 2007 by TV Guide, a magazine that was owned at the time by Rupert Murdoch. There was a reason that Murdoch might have deliberately categorized his own “news” channel as entertainment. It mainly centers around the fact that entertainment programming always outperforms news programming. [More on this theory here] 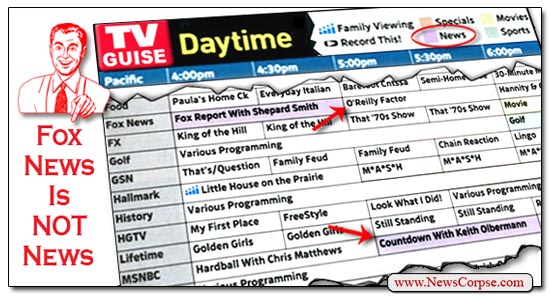 Also of note in Ailes’ statement to the Hollywood Reporter is his appreciation for a certain program on MSNBC:

“I flip to MSNBC occasionally to make sure their blind pig didn’t find an acorn. But they never have once. I tell you who I do like at MSNBC — I like Joe and Mika.”

Setting aside his childish insults, the fact that Ailes likes Morning Joe is reason enough to cancel the program. After all, Ailes also likes pathological liar Bill O’Reilly, bombastic librul-hater Sean Hannity, rightist tool Neil Cavuto, news floozy Megyn Kelly, clown boy Steve Doocy, and I don’t even have sufficient adjectives for Donald Trump and Sarah Palin. If I were Joe Scarborough I’d be thinking “With friends like Ailes, who needs enemas?”