If anyone was mislead by the National Rifle Association’s name to assume that their annual conference would have something to do with firearms and their use for protection or sports, that was cleared up in the first day of the event by the organization’s executive vice president and chief fear monger, Wayne LaPierre. He and pretty much every other speaker spent more time demonizing Hillary Clinton than exercising their gun fetishes. In a foreboding speech crammed with frightful rhetoric about how much danger every American is in on a virtually constant basis, LaPierre built up to a crescendo that climaxed with this harrowing thought:

“Hillary Rodham Clinton will bring a permanent darkness of deceit and despair forced upon the American people to endure.” 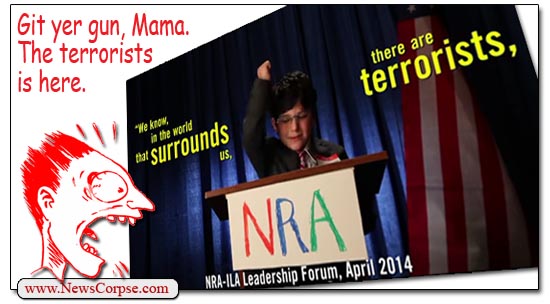 Note that LaPierre is not merely warning of ordinary darkness, deceit, and despair, but a “permanent” state of this nightmarish horror. That’s conceding an enormous amount of power to Clinton, who LaPierre must regard as rivaling the Almighty in terms of her ability to thrust the world into a dystopian gloom. Never mind that he said the same thing about President Obama before each of his election victories, and yet, by most accounts, the sun still shines and experiences of joy have not been ripped from the human race. He went on to swear a sacred oath to his fellow NRA-theists, saying…

“I vow on this day the NRA will stand shoulder to shoulder with you and good, honest decent Americans and we will stand and fight with everything we’ve got and in 2016, by God, we will elect the next great president of the United States of America and it will not be Hillary Rodham Clinton.”

That statement would appear to violate the rules governing the NRA’s tax status as a 501(c)(4) organization that permits some involvement in politics as long as it is not a substantial amount of its activities. His promise to “fight with everything we’ve got” sounds pretty substantial.

LaPierre was followed by other speakers who similarly downplayed any discussion of guns, instead aiming their vitriol at Clinton. They included Republican presidential hopefuls Jeb Bush, Bobby Jindal, Scott Walker, Rick Perry, Marco Rubio, Donald Trump, Rick Santorum, Mike Huckabee, and Ted Cruz, who asked the audience if they were “ready for Hillary,” to which they resoundingly answered “No.” I’m inclined to agree with them. They’re not the least bit ready.

But perhaps the most strikingly foolish comment was from brain-dead brain surgeon Ben Carson who said that Americans need more guns so they can personally fight off the terrorists flooding across the Southern border (of his mind). For the record, the number of terrorists apprehended in the U.S. who came into the country illegally from the South, or any other entry point, is zero. And the likelihood of some redneck facing off in a shootout with with an ISIS fighter, and prevailing, is pretty near zero as well. Carson added that guns are also necessary for people to “defend themselves against an overly aggressive government that wanted to exact tyranny in this country.” So he is now advocating shooting federal agents, soldiers, and police officers (aka first responders), in a war where the government has tanks, weaponized drones, and cruise missiles.

These are the priorities and allegiances of America’s ammosexuals. They couldn’t care less about the children murdered at Sandy Hook, or the innocents at a Colorado movie theater, or the students at a Virginia university, or the thousands of other preventable gun deaths that occur annually in this country. They are gripped by irrational fears and manipulated by the NRA which hides its true mission: To promote the sales of firearms and the other commercial interests of weapons manufacturers. Even Kids can understand these simple truths, as beautifully demonstrated in this video: