Media observers have not missed the preponderance of titillating and sexually suggestive content that permeates so much of the Fox News broadcast day. The on-air personalities who are young, blonde women far outnumber their ratio of the population at large. Ironically Fox has a program called “Outnumbered” that features four young female co-hosts. And no cable “news” network has done more segments than Fox on Hooters and spring break and hot teachers who seduce the boys in their classrooms.

Fox’s women exclusively wear short skirts and it has been reported that they have been ordered by management to do so. Gabriel Sherman wrote in his biography of Fox News CEO Roger Ailes, “The Loudest Voice In The Room,” that Ailes has repeatedly given direction to his staff regarding the display of female body parts. Furthermore, NPR’s media reporter David Folkenflik was told by knowledgeable sources about the Fox News “Leg Cam” that “goes directly for the legs.” And when host Megyn Kelly was interviewed by GQ (with an accompanying, and revealing, pictorial), she was asked about her own “glass table that shows off your legs.” She responded that “Well, It’s a visual business. People want to see the anchor.” That must be why Sean Hannity struts across the stage in those fuck-me pumps.

A new study published in the journal Archives of Sexual Behavior sheds some light on why Fox features so much skin. The study found that “American states that identify as more religious and conservative are also more apt to search for sex online.” The researchers concluded that in parts of the country where sexuality is suppressed by religious tradition, there is a pent up demand for that forbidden fruit.

The jackpot for Fox, and their audience, comes when Fox can manage to combine porn and politics. An example of that occurred this morning in a segment on Fox & Friends that reported on a man who was acquitted for taking “upskirt” photographs. This gave the program an excuse to show sexy pictures and talk about the decadence of liberalism. One guest even provided justification for the lascivious proclivities of Fox’s viewers by blaming the victims in the case, saying that “These women made a conscious choice […] to wear certain clothes that day, and some of their body parts were the public domain.” That is, in effect, a legal argument for Peeping Toms. 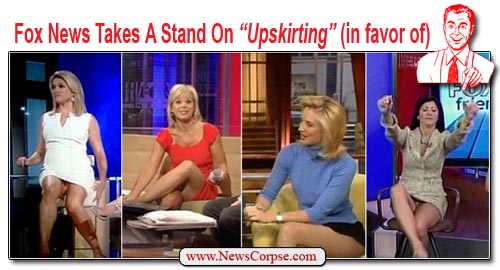 The conservative states that revel in pornography do so in contravention of their Puritan reputation. But the correlation to their politics makes perfect sense. In both cases they are fixated on fantasies from which they derive extreme pleasure. And Fox News is their Orgasm Channel in more ways than one.