Yesterday marked the arrival of the second official candidate for the Republican Party’s nomination for President of the United States. Kentucky senator, and former self-certified ophthalmologist, Rand Paul placed himself in contention for the nomination at the Galt House in Louisville. For those fortunate enough to have never slogged through Ayn Rand’s tedious and preachy novel “Atlas Shrugged,” John Galt is a leading figure who is best known for epitomizing the childish “take my ball and go home” philosophy of social interaction. 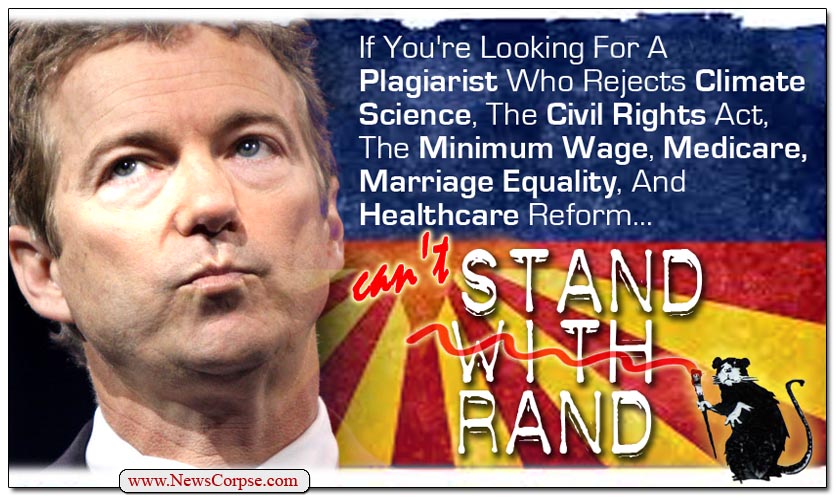 In what may signal a trend in the GOP’s strategy for launching a political campaign, Paul went straight from the Galt House to Sean Hannity’s House at Fox News for his first post-announcement interview. That is exactly what Ted Cruz did after announcing his candidacy at Jerry Falwell’s Liberty University, where students were threatened with fines if they did not attend. Perhaps Fox News has implemented the same policy wherein Republican candidates will be fined, or otherwise punished, if they do not pay their respects to Hannity before proceeding with their campaign.

While it is no surprise that GOP presidential wannabes would kowtow to Fox News (aka the PR division of the Republican Party), it is a demonstration of their arrogance that they are not at least trying to disguise their biases for the sake of appearing to be credible. Apparently that ship has sailed, been commandeered by Fox pirates, and is now rusting on the ocean floor.

As for Paul, he delivered what he called a “a message that is loud and clear and does not mince words.” Indeed, it was loud. And that message turned out to be decades old sloganeering whose words relay nothing of substance: “We have come to take our country back.” It’s easy to mock this theme by asking simply “back to what?” From all appearances, Paul wants to take us back to the Reagan years, with its soaring deficits, crushing unions and working people, abandonment of the poor and mentally ill to the streets, and illegally bankrolling foreign terrorists with money made from selling arms to terrorist states.

However, the more interesting question is who does Paul mean when says “We?” The “we” that he is leading so that he can snatch the country back from the citizens who twice elected Barack Obama, are the bankers, oil barons, and other privileged elites who he would free from regulations that protect the public from their greed and abuse. Paul is a favorite of the Koch brothers and, of course, Fox News kingpin, Rupert Murdoch.

It will be interesting to see how the rest of the GOP roster rolls out their campaigns. Marco Rubio is anticipated to be next in line. He would be smart to skip the Hannity ring-kissing ceremony, if just to differentiate himself from the pack. After all, he could go straight to Megyn Kelly and still satisfy his bosses at the network.

And just for fun…

Paul was famously outed as a plagiarist by Rachel Maddow who noticed that his speeches were curiously identical to the Wikipedia page for the movie Gattaca. If that seems like an odd source for staking a false claim of authorship, then what do we make of his having designed a logo for his presidential campaign that appears to be a rip-off of the logo for the hook-up site, Tinder? 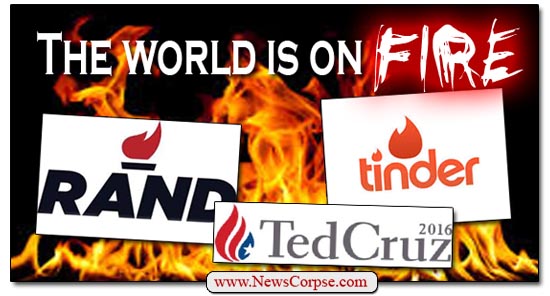 I’m just asking. And while we’re at it, why do both Paul and Cruz feature flames in their logos? Is it to convey their belief that “the world is on fire,” as Cruz told a frightened little girl?