Yesterday marked the entry of the third contender for the Republican nomination for president of the United States. Like the two that preceded him (Ted Cruz and Rand Paul), Marco Rubio hightailed it over to Sean Hannity’s ring-kissing emporium to get the blessing of Fox News. That makes Hannity three for three in getting the first post-announcement interviews from GOP candidates. 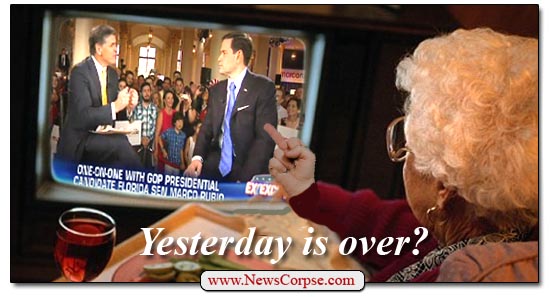 In his speech, Rubio reiterated his resume as a son of the sort of immigrants that he would now prohibit from achieving the American Dream. Like all Republicans, now that he has moved higher he would pull the ladder up behind him. But the most prominent theme in his testimonial to himself was the profound revelation that America’s future lies in the future and that the past is behind us. Hmm…makes ya think, huh?

To illustrate this message, Rubio took a rhetorical swipe at old fogies like Hillary Clinton and Jeb Bush who represent an ancient, bygone era that holds nothing of value for today’s society:

“Yesterday is over, and we are never going back. We Americans are proud of our history, but our country has always been about the future. Before us now is the opportunity to author the greatest chapter yet in the amazing story of America. We can’t do that by going back to the leaders and ideas of the past.”

Some folks may think that Rubio’s admonition that “we are never going back” is the small-minded perspective of someone who cannot imagine technology advancing to the point that time travel becomes possible. Obviously he is not as attuned to the future as he pretends to be.

But what he really fails to comprehend is that, contrary to his assertion that “our country has always been about the future,” it is the opposite that is true. Our country has always been about exalting the past as a romantic adventure filled with glory and heroism. In fact, it is Republicans who have been most adamant about the virtues of the past. They desperately want to return to a time when women and minorities knew their place; when Christianity was the universal faith practiced in every home, school, and government office; when morality was imposed by a vengeful God who hated all the things that patriotic Americans hated.

And Rubio’s futuristic, forward-thinking policies that will thrust America into a new century of world dominance? Small government, lower taxes for the rich, expand military, cut Social Security, ban gay marriage, deny Climate Change, and force prayer into schools and government. All he needs to do is add fight commies and segregate lunch counters and he has a future that looks exactly like 1950.

By condemning “the leaders and ideas of the past” as unable to contribute to America’s next amazing chapter, Rubio is shunting aside the sanctified memory of Ronald Reagan. He is ripping apart the mythology of our Founding Fathers as the creators of everything good about America. He is abandoning the concept of strict constructionism as the defining principle of our laws. Hey, I might vote for this guy.

On the other hand, Rubio’s rejection of the past ought to outrage his fellow Republicans. That is, if they were intellectually capable of grasping the meaning of his repulsive ageism. Not only is he belittling St. Reagan, he is disparaging the most reliable voter constituency in the country – seniors. You have to wonder whether Rubio gave any thought to the notion that, by insulting older Americans as rotting on the vine, no longer having any ideas, leadership skills, or worth, it might cause them to be less than inclined to support his campaign. You see, Rubio’s geezer-bashing not only lands blows on his political foes, but also on everyone of that generation who may take personally his cutting remarks.

Young Americans (who love being reduced to the demographic stereotype Millenials) are certainly going to be a part of the “new American century,” maybe the biggest part. But so are their parents and grandparents who have most of the experience, wisdom, money, and motivation to vote. It is one thing to run a campaign on fresh ideas and innovation (as if the GOP had any), but it is another thing entirely to malign millions of mature citizens/voters. And Rubio can’t have both his youth-focused theme and his party’s fetish with an idealized past.

16 thoughts on “Marco Rubio Craps All Over Ronald Reagan, The Founding Fathers, And America’s Seniors”