In the months prior to the 2014 mid-term election, numerous Republican politicians and pundits openly lusted for an opportunity to impeach President Obama for imagined offenses that they could never actually make stick. The absence of evidence, however, did not stop the parade of pitchfork wielding wackos demanding that the popularly elected president be ousted. 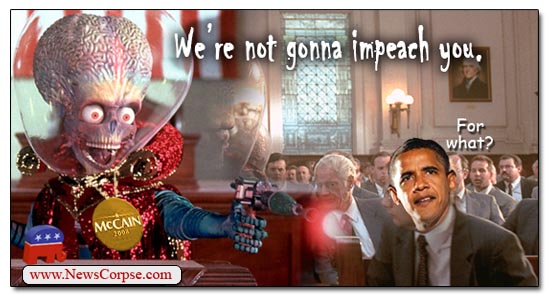 And it wasn’t just the usual kooks from the fringe contingent who were flinging charges around. The White House gate-crashers included congressional members like representatives Steven Scalise, Jason Chaffetz, Louie Gohmert, Michele Bachmann, Darrell Issa, and senators James Inhofe, Jon Kyl, and Tom Coburn. Of course, the kook brigade would not sit on the sidelines either. Sarah Palin, Rush Limbaugh, Glenn Beck, and a flurry of Fox News figures like Sean Hannity, Andrew Napolitano, Todd Starnes, Allen West, and Dick Morris were all over this.

Despite this surge of aspiring impeachers, some on the right pretended that there was no such movement. GOP House Speaker John Boehenr said that the whole thing was a scam cooked up by Democrats and Obama, who actually wanted to impeach himself. Fox’s Megyn Kelly struggled to advance the notion that the controversy was a fake by citing a poll that showed that 61% of Americans were opposed to impeachment. Of course they were. But what she declined to reveal was that the same poll showed that 56% of Republicans favored it, along with 68% of Tea Partiers.

Today we have learned that the predictions that Republicans would seek impeachment if they were successful in winning control of the Senate last November, were true. Florida representative Ted Yoho (R-Tea Party) has drafted legislation that purports to define the meaning of “high crimes and misdemeanors” as referenced in the constitutional clause granting the power of impeachment to the House of Representatives. His definition just happens to include every political argument against Obama that the right has been making in their impeachment crusade. What a coincidence.

Aside from being an obvious attempt to shape a new law aimed directly at the President, the bill reads like the work of brain-damaged dimwit on acid-laced meth. In his enumeration of “Whereases” he even includes one that obviates the need for the bill at all:

If the legal standard already has an objective meaning, then what is the purpose of this bill? That question is answered in the next section of the bill that lists the “impeachable offenses.” To be sure, there are some unsavory crimes listed that ought to result in serious consequences for any executive. However, there is also a familiarity about them that seems to apply to just the complaints that wingnuts have about the current president. And then there are also a couple of political items that could never be adjudicated as impeachable.

However, the problem with this list is not whether the items on it are good or bad. It’s that they are there at all. By composing a list that purports to identify all of the actions that can result in impeachment, there is an infinite number of actions that could not be grounds for impeachment because they aren’t on the list. It’s a rookie legislative mistake.

Richard Nixon could not have been impeached if this list were in effect during his presidency. It also doesn’t provide a path to impeaching a president who embezzles a billion dollars and deposits it in a Swiss bank account. It doesn’t cover a president who breaks the legs of a governor who doesn’t support his agenda. A president could sell arms to Iran and use the proceeds to bankroll terrorists in Nicaragua without violating this law (Reagan would have signed it with glee).

That’s the problem with explicitly enumerating the actions that would trigger the law. And since “high crimes and misdemeanors” already has an objective meaning, there is no reason to make such a list. It is the responsibility of the House of Representatives to file articles of impeachment, make a reasoned argument for them, and pass it on to the senate for trial.

If the House gives this bill serious consideration, they will only be solidifying their reputation as baldly political creatures with contempt for the law. Therefore, don’t be too surprised if they pass it. Their hunger for punishing this President is still palpable. It is a fever that they cannot suppress. And impeachment is clearly still on their diseased minds.