First things first: Freedom of speech is a cherished liberty among all Americans and most citizens of the rest of the world. It is the bedrock upon which all other freedoms rest. Preserving it is critical for civilized societies to exist. And it must be honored for all speech, especially that which is regarded as unpopular or offensive.

That said, in the practice of defending free speech we must be able to distinguish between actual expressions of genuine thoughts and beliefs, as opposed to cynical exploitation aimed at inflaming emotions and inciting violence. Just as shouting “fire” in a crowded theater when there is no fire is not protected speech, staging events meant to cause harm is not an excusable act under the First Amendment.

Hypocrites who pervert the notion of free expression need to be called out. They are often easy to spot. They complain bitterly when they are not allowed to malign and insult others with impunity. And while they insist that any derogatory speech directed at their heroes be condemned and suppressed, they outright lust for words and pictures that offend those whom they don’t particularly like. That’s how they can justify support for blatantly repulsive speech against Muslims or other enemies of right-wingers, but the slightest perceived slur aimed at Christians or other conservatives is an abomination. [Just ask the Dixie Chicks and the casualties in the War on Christmas] 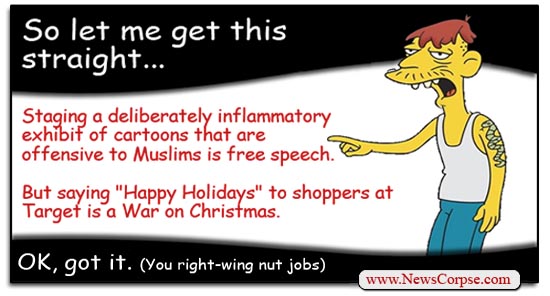 The affair in Garland, Texas was advertised as “The Inaugural Muhammad Art Exhibit and Contest.” But lest anyone mistake it for a legitimate exercise in free speech, the facts about its organizers and purpose must be known.

The event was a project of the American Freedom Defense Initiative, a virulent anti-Islamic operation that has been been identified by the Southern Poverty Law Center as a hate group. It is run by notorious Islamophobes, Pamela Geller and Robert Spencer. Geller & Co. have often produced media-centric events to promote an overtly bigoted agenda, of which the event in Garland is just the latest example.

To underscore the evil intentions behind this gathering, note that the venue chosen was the very same venue where Muslims held a conference in January of this year with the stated mission of making it clear that terrorists like ISIS and Al Qaeda are “enemies of Islam who are hurting Muslims and neighborly relations toward the world.” That event was heckled by right-wing protesters who apparently object to peaceful Muslims who repudiate terrorism.

Geller admitted that she picked this site as a response to the previous, pro-peace event put on by area Muslims. Which also raises the significance of the fact that the Garland community has a growing Muslim population. Consequently, holding an openly hateful event in such a community is purposefully provocative.

So can this rightly be called a “free speech” event when the primary activity is an alleged “art” contest that the producers know will be inflammatory; the site was chosen as a deliberate poke in the eye; the community is home to those the organizers wish to offend; the guests include international anti-Islam activist Geert Wilders; and the participants are professional hate mongers? Wouldn’t it more more correct to call this a deliberate provocation intended to incite violence?

There was obviously no intent on the part of Geller and her hate brigade to engage in a sincere public discourse. It is far more likely that she got exactly what she wanted when a couple of would-be terrorists showed up with guns blazing. Sadly, what isn’t being reported in the media is that the leaders of the broader Muslim community at large condemned the shooting and expressed unreserved support for the free speech rights of Geller et al. They also counseled other Muslims in the area to refrain from even showing up to protest the event, in order to preserve the peace. In that effort they were successful as there was no onsite protest. The only alleged Muslims who showed up were, unfortunately, the gunmen.

It’s really too bad that there are people like Geller whose sole purpose in life is to create chaos and disharmony. And it makes it all the worse that they twist cherished principles like freedom of speech to incite violence. It is also too bad that there are idiots who will take the bait and give the hate mongers what they yearn for. Yes, Geller is just as entitled to free speech as anyone else. But she is coming awfully close to that line where she is shouting “fire” and hoping that innocent people get trampled.

47 thoughts on “Muhammad Cartoon Contest In Garland, Texas Had Nothing To Do With Free Speech”