Tuesday saw the official release of Peter Schweizer’s latest foray into sloppy and dishonest pseudo-journalism, Clinton Cash. Even before the book hit the shelves it was widely debunked by more reputable analysts who found numerous errors, unsupported speculations, and outright inventions. Even Schweizer himself was forced to acknowledge that some of his allegations were untrue and that none of them could be proven.

The clear purpose of the book is to smear likely Democratic presidential nominee Hillary Clinton. Despite Schweizer’s feeble attempts to characterize his book as an impartial examination of Clinton’s finances, he has been a long-time Republican operative including stints as a speechwriter for George W. Bush and advisor to Sarah Palin. In addition, he is closely affiliated with ultra-conservatives like the Koch brothers and Breitbart News. However, there is another highly motivated player in this well-coordinated attack campaign that is getting less attention. 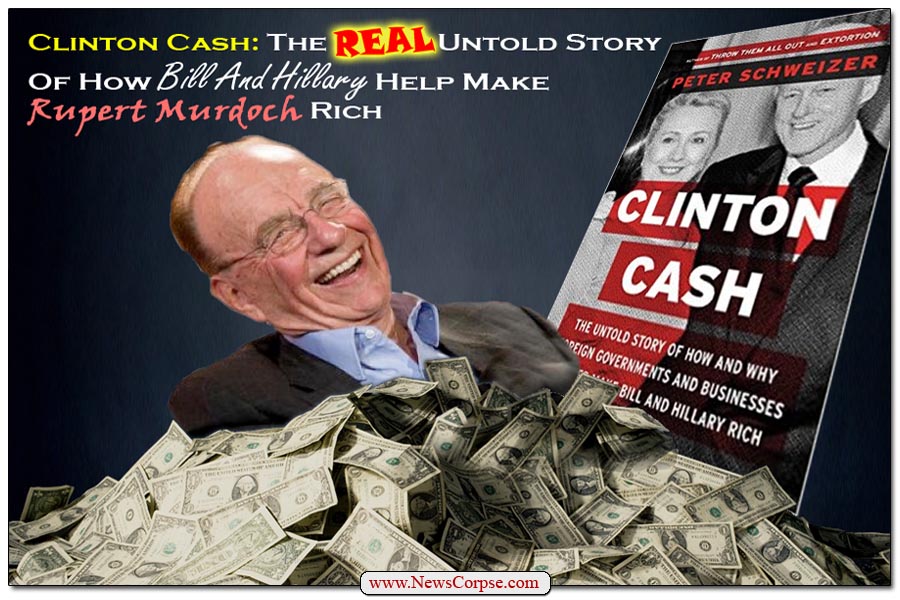 Rupert Murdoch, chairman of News Corp and 21st Century Fox, commands a vast empire of media businesses that share a determined leaning toward activist, far-right politics. So it is not surprising that a committed conservative like Schweizer would integrate himself into the Murdoch machine. As a result, the opportunities for propaganda and profit become plentiful.

Schweizer’s book was published by HarperCollins, which is owned by Murdoch’s News Corp. So making the book a bestseller puts cash directly into Murdoch’s wallet. To that end, Murdoch has exploited his own Fox News which has gone into overdrive promoting the book. Schweizer has become an almost daily fixture on the network, and when he isn’t there himself, the network hands those promotional duties to their anchors and guests. All told, Fox News has donated the equivalent of more than $107 million to the marketing of the book, according to an analysis by Media Matters.

And speaking Fox News, the network produced and aired its own hour-long special (The Tangled Clinton Web) that served as an unabashed infomercial for the book. And rather than assigning a political personality like Sean Hannity to the brazenly partisan project, it was hosted by Fox’s chief news anchor, Bret Baier. The program was repeated several times. So while running PR for the book, Fox News is also chasing ratings and advertising dollars from the book’s rollout.

In addition, Murdoch’s print news operations joined in the Clinton Cashing in fest. The Wall Street Journal ran a feature editorial parroting the unsubstantiated claims in the Schweizer book and labeling the work of the Clinton’s foundation as “dishonest graft.” The New York Post devoted its cover to hawking the book and mocking the Clintons as money-hungry opportunists. A charge that reeks of irony coming from the realm of Rupert Murdoch.

Since when did free-enterprise loving right-wingers become so hostile to people achieving success through hard work and entrepreneurial ability? This ideological flip-flop was so pronounced that veteran Clinton-basher, Christopher Ruddy, CEO of the uber-rightist Newsmax, wrote an editorial denouncing Schweizer’s book and Fox’s role in selling it. The article was titled “In Defense of the Clinton Foundation,” and went to great lengths to criticize both the shoddy reporting in the book and the blatant exploitation of Murdoch’s own tangled web.

There is no doubt that Schweizer’s book is intended to damage Hillary Clinton’s White House aspirations. It was planned and executed by people with long-standing animosity for both the Clintons and Democratic politics. But the evidence that it is also a profit-making vehicle for Rupert Murdoch is unavoidable. And that is the true meaning of the title. Murdoch is orchestrating this whole fraudulent scheme because he wants to be rolling in Clinton Cash.