A new study by the Pew Research Center reveals some striking generational disparities between America’s news consumers. The study’s results cast the light of perspective on the marketing hype of Fox News, who brag incessantly about being the highest rated cable news network.

The ratings boast has always been a specious act of puffery by Fox News considering that their numbers are achieved by herding all of the wingnut demographic into a single corral, while the remaining TV viewing universe is dispersed to the rest of the available channels. What’s more, Fox’s ratings represent a tiny portion (about 1%) of the nation’s population on their best showing. 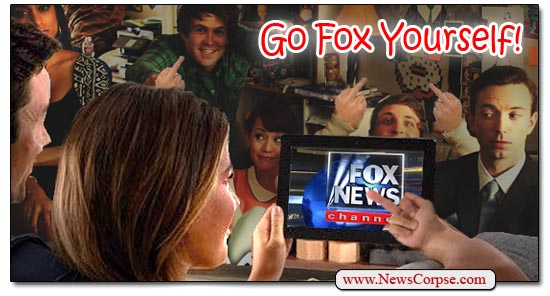 What we learn from the Pew study is that Fox’s appeal among young viewers sets a low water mark for the network. Millennial respondents in the study say that they trust Fox News less than any other news source. A plurality of 43% distrust Fox News. That’s significantly more than the next lowest source, Rush Limbaugh, who is also distrusted by far more millennials (32%) than trust him (4%). The 43% of Millennials who distrust Fox is nearly three times the number who distrust MSNBC (15%).

Looking at the numbers from the other direction, the percentage who trust Fox (35%) is less than CNN (60%), MSNBC (37%), and 4 to 12 points less than the three broadcast news networks. Even sources like the Daily Show and Al Jazeera, whose sample sizes are smaller, are still rated with more viewers that trust them than distrust them, compared to Fox’s net distrust results.

The numbers aren’t much better in other demographic groupings. Gen-Xers trust Fox News less than every other source except for Limbaugh. And the same thing is true for the Baby Boomers who are Fox’s best demo. With a median age of 68.8 years, Fox’s audience is over six years older than either CNN or MSNBC. It’s even worse for their top rated program (Bill O’Reilly) who’s average viewer is over 72 years old.

In addition to the poor showing by Fox News, the rest of the study’s bottom dwellers are primarily right-wing radio talkers, Limbaugh, Sean Hannity, and Glenn Beck.

From a business perspective, Fox News has to be deeply concerned about the next generation of viewers. If their opinions remain constant they are not going to be tuning in to Fox. However, putting this in a political context is more complex. While Millennials clearly have an aversion to Fox’s conservative programming, they are also less likely to participate in the electoral process. On the other hand, about half of the older Baby Boomers are fond of Fox, and they are more reliable voters. So Republicans may have some short-term advantage from that, but looking forward to the next generation of seniors is going to be a problem for Fox and the Republican Party.

Of Course , all of that may change if Millennials become more active politically due to factors like the first African-American president, or the first woman, or Latino, or candidates who support marriage equality and marijuana legalization. And Fox has been busy alienating all of the fastest growing voter blocs while simultaneously insulting their base of seniors with derogatory swipes at Hillary Clinton’s age. Even before this Pew study, polls have shown Fox News as both the most and least trusted news network.

The technological platforms for news are also drawing more young people. So participation by those connected to Facebook and Twitter will likely increase. In short, the future is a mystery. What isn’t mysterious is that Fox News is rapidly becoming a universally hated network. Its biases and brazenly dishonest reporting are being rejected in ever greater numbers. It is a fading entity whose prospects are dwindling with time. And that’s good news for democracy and America and the world.

10 thoughts on “Pew: Millennials Distrust Fox News More Than Any Other News Source”