Fading reality TV loser and notorious political quitter, Sarah Palin, hasn’t been heard from much lately. Her sightings on Fox News have become rare, with the last appearance sometime back in January. Unfortunately, her unique brand of dementia seems to be enduring as one of her classically idiotic themes made a comeback on the Fox Nation website: 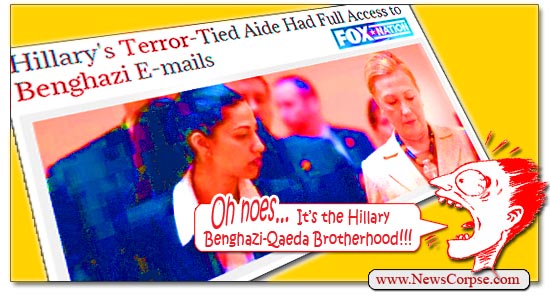 A featured article on Fox Nation was topped with a headline that declared that “Hillary’s Terror-Tied Aide Had Full Access to Benghazi E-Mails.” This immediately brings to mind the memory of Palin’s famously loony “pallin’ around with terrorists” allegation that falsely tried to tie then-candidate Barack Obama to former Weather Underground radical (now mild-mannered college professor) Bill Ayers.

The reprise of this stupidity is based on the thoroughly discredited accusations that Clinton aide Huma Abedin is a deep-cover agent of the Muslim Brotherhood who is plotting to destroy America from within. Never mind that Abedin, who was born in Michigan, has been a trusted and respected public servant for many years. The charges against her were originally leveled by congressional “intelligence” experts, Michelle Bachmann, Louie Gohmert, and other Tea Party fruitcakes.

When the terrorist slurs first began circulating they were shot down by everyone that knew Abedin, including prominent Republicans. House Speaker John Boehner defended her saying that she had a “sterling character.” Lindsey Graham called the attacks on her “ridiculous.” John McCain praised her saying that she “represents what is best about America” and that the charges were “an unwarranted and unfounded attack on an honorable woman.” Ed Rollins, who managed Bachmann’s presidential campaign, repudiated the attacks as “downright vicious.”

The Fox Nation article links to the ultra-rightist propagandists at Truth Revolt, a website that was founded by Breitbart Editor-at-Large, Ben Shapiro. Truth Revolt, in turn referenced the conspiracy crackpots at WorldNetDaily, who are still grasping feverishly to the birther nonsense. The WND article was written by Aaron Klein, who believes that Obama might be a Muslim who sides with Al Qaeda. So Truth Revolt re-posts WND and Fox Nation re-posts Truth Revolt, with an opening paragraph that launches into a surreal fantasy:

“It has been revealed that Huma Abedin, senior aide to Hillary Clinton, had access to Clinton’s personal e-mails including highly-sensitive details surrounding Benghazi. Abedin is also accused of having ties to Muslim extremist groups. […] WND reports personal and familial ties between Abedin, the Muslim Brotherhood, as well as al Qaeda.”

There you have it. With absolutely no factual basis, Fox News has bought into scurrilous charges against a respectable woman, associating her with America’s most virulent enemies. And as an additional bonus, Fox worked in a mention of their favorite recurring non-scandal, Benghazi.

If there is anyone left who still thinks that Fox News is a reputable journalism enterprise, or that they might have moderated their extremist views since the last presidential election, this should put an end to those fallacies. As the next presidential cycle gets into gear, it is clear that Fox intends to ramp up the crazy to levels at least as deranged as those in 2008 and 2012. So here come the terrorist charges against the presumptive Democratic nominee. Because if you’re a Tea Party wingnut it isn’t enough to merely have policy disputes with political rivals, you must demonize them as threats to the continued existence of mankind.

As evidence of this trend, note the latest outrage being hyped on Fox News. It’s a brief video clip that shows Clinton politely asking a supporter to take her place in line in order to get a photo with the candidate.

On Fox News this is proof that Clinton is an Ice Queen who cannot relate to regular humans. Of course, the fact that the video is chopped into a fragment that fails to put Clinton’s encounter in context is irrelevant to the spinners at Fox. To them it is more important to create an artificial persona for Clinton that makes her look mean and elitist. And surprisingly, an anchor at Fox actually admitted that it is their intention to promote this video misrepresentation.

Martha MacCallum: Oh my, why don’t you go to the end of the line. When I saw this yesterday, this is just gonna get played over and over here, and elsewhere, and this is not good for Hillary Clinton regardless of what the circumstances exactly were.
Byron York: I should say that some people have looked at the whole video and Mrs. Clinton was actually trying to accommodate the people who had lined up to see her. But it points really to a bigger problem.

So MacCallum admits that Fox will put this video on an endless loop even if the impression it leaves is false. And her guest confesses that in the uncut video Clinton’s behavior was entirely appropriate, but that doesn’t matter when you are trying to slander her.

That’s the sort of dishonesty and bias that has been the hallmark of Fox News. Consequently, it’s not particularly surprising that they are continuing to debase journalism just as they have from their inception. What’s a little surprising is that they are openly admitting it even as they are doing it. That shows how certain they are that they can get away with their deceit without any repercussions. They know very well that their audience couldn’t care less about truth or lies, even if they could tell the difference.