The “liberal” New York Times is taking heat for having published an Internet blurb detailing the rap sheet for the Rubio family on file with the Florida Department of Motor Vehicles. It seems that the senator, and aspiring presidential candidate, and his wife racked up some seventeen tickets for speeding, careless driving, etc. The Times’ item was posted on Friday at a time generally reserved for “news dumps.” 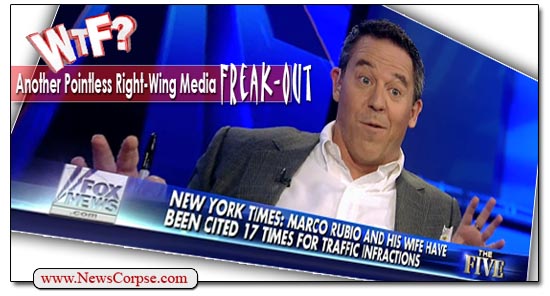 The conservative media regulars snapped to attention and immediately began castigating the Times for having reported a true, albeit trivial story. The effect of their accumulated outrage was to turn an online throwaway into a three day (and counting) event. Participating in the bash-fest were…

There were, of course, many more, and Fox News has repeated the story numerous times. But perhaps the most offensive contribution to the Times thump-a-thon came from BreitBrat Ben Shapiro, who Tweeted a photo of the late Sen. Ted Kennedy’s car submerged at Chappaquiddick forty-six years ago. Talk about straying off-topic. Kennedy is not currently a candidate for president and he is, sadly, not here to defend himself. Maybe Shapiro would like to comment on the guy that Laura Bush killed in a tragic car accident. That would be just as relevant. Even more so, since her brother-in-law is running for president and she is around to comment on the matter. [This just in: Greg Gutfeld of Fox News also joked about Kennedy as he dismissed Rubios’s poor driving by saying that “At least he didn’t drive anybody off a bridge.” This even caused his co-hosts on The Five to groan disapprovingly]

Most noticeable in this orchestrated defense of the Rubios, however, is the typical wailing of wingnuts who have been caught doing something wrong. Their first response is always to cry “media bias” and to lament their victimization at the hands of the cold-hearted press. It’s the very same reaction that is currently being deployed by the despicable Duggar family’s defense of their pedophile son Josh. These people think that the media reporting on alleged crimes is worse than the the crime itself.

Unfortunately for them, the facts don’t fit with their fantasy narrative. If the media is demonstrating some sort of bias by reporting Rubio’s traffic tickets, then what were they demonstrating when they reported Barack Obama’s parking tickets back in 2008? As published in a story by the “liberal” Washington Post…

“Democratic presidential candidate Barack Obama got more than an education when he attended Harvard Law School in the late 1980s. He also got a healthy stack of parking tickets, most of which he never paid.

“The Illinois Senator shelled out $375 in January _ two weeks before he officially launched his presidential campaign _ to finally pay for 15 outstanding parking tickets and their associated late fees.”

Did any of the usual right-wing suspects noted above come to Obama’s defense and condemn the Post for smearing him? Was there any expressed outrage over how the media resorts to trivialities when there are much bigger problems facing the world? Was there any forgiveness from the right because Obama at the time was a poor student and these were just parking tickets, not moving violations like Rubio’s.

Nope, none of that Christian mercy that conservatives are so fond of flashing was on display. That’s because, they don’t really care about the substance of these issues.

Instead, they are singularly interested in furthering the spread of their favorite fairy tale that the media is hopelessly liberal and that this unwarranted attack on Rubio is just another example of it. That’s how they can justify stretching this trifling news bite into a multi-day tribulation. It feeds their manufactured stereotype of the media and they will continue to chomp on it until the flavor is gone.