The conservative hate machine is churning out bile twenty four hours a day, seven days a week. It is a non-stop factory of hostility that is distributed to all manner of liberal “enemies” in an effort to smear the innocent and divide the country. As a result of the relentless manufacturing schedule, there are times when the source material gets pretty thin and, frankly, stupid. 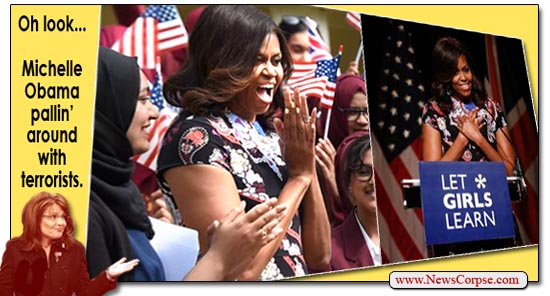 One of those times came this week when First Lady Michelle Obama traveled to the U.K. with her daughters and visited the Mulberry School for Girls in London. The message she came to deliver was a positive one that emphasized the need to ensure that girls around the world have access to education. She was promoting her “Let Girls Learn” initiative with a mission that recognizes that…

“To educate a girl is to build a healthier family, a stronger community, and a brighter future. Unfortunately today, 62 million girls around the world are not in school. Half of them are adolescents. We know that countries with more girls in secondary school tend to have lower maternal mortality rates, lower infant mortality rates, lower rates of HIV/AIDS, and better child nutrition. But too often, a girl who could change her world for the better is locked out of that future by the circumstances of her birth or the customs of her community.”

So obviously the right-wing zealots who thrive on baseless contempt had to turn this worthy event into something evil and un-American. The hook that the haters latched onto was a sentence fragment where Obama told the students that “In so many ways your story is my story.” For context, here is a bit more from that part of the inspiring speech:

“I’m here because girls like you inspire me and impress me every single day. I am so proud of your passion, your diligence; as Dr. Ogden said, your grit, your determination. And I am beyond thrilled that you are working so hard to complete your education. It is so important.

“And I’m here because when I look out at all of these young women, I see myself. I may come from a country that’s an ocean away, but — I’m a bit older than you all. (Laughter.) Yes, I am. I know I don’t look it. (Laughter.) But I’m just a little older. But in so many ways, your story is my story.”

Obama went on to describe the struggle she faced as child growing up on the south side of Chicago. She told them about the trials and the obstacles, as well as the achievements and the satisfaction that comes from hard work and dedication. And it was from these stories of perseverance and accomplishment that conservative jerkwads contrived an abomination. Apparently the only thing of interest to these misogynist racists bent on defaming the First Lady was that the school was in a minority neighborhood and served a largely Muslim community. These are a few of the headlines from articles in the wingnut press reporting Obama’s visit to the school:

There is a unique brand of dementia demonstrated in those headlines. No sane appraisal could find that Obama had disparaged America. To the contrary, she praised the opportunities that were available to her and pledged to make those opportunities available more broadly around the world. And the accusation that there were any terrorists among these children is just plain lunacy.

It is astonishing that these ignorant right-wing blowhards can so quickly forget the heroism of people like Malala Yousafzai, who in 2012 was shot in the face at the age of fifteen by Taliban terrorists for advocating education for girls in Pakistan. She survived and went on to become an international activist, winning the Nobel Peace Prize in 2014.

It is girls like Malala that attend the Mulberry School, often in defiance of the extremists in their community who don’t believe that women should be educated. And it is the girls at Mulberry that conservatives are calling terrorists and using to malign the First Lady. We have long known that conservatives have no problem lying in order to achieve their ends. They have no problem slandering those with whom they disagree. And to that we can add that they really have no shame.

This is the video of Michelle Obama at the Mulberry School: