Last night there was another of the sort of tragedies that are becoming painfully common in modern America. The Emanuel AME Church, an historic African-American church in Charleston, South Carolina, was attacked by an openly racist gunman who managed to take the lives of nine innocent people before fleeing into the night. This morning police in North Carolina apprehended Dylann Storm Roof, the alleged perpetrator.

Despite the readily available facts from police and witnesses, Fox News immediately went into a defensive posture to mitigate any speculation that race might have been the motive in the crime. The general editorial viewpoint of Fox News is that racism ceased to exist when President Obama was elected. Never mind that his election brought out the racists at Fox who questioned his birth, his faith, his patriotism, and accused him of deliberately inciting racial violence and riots.

Fox News has also been a critic of studies that show that America is far more at risk due to threats from right-wing, domestic terrorists than from foreign extremist Islamic groups like ISIS. Just the mention of such studies brings outrage from offended rightists who are desperate to avoid seeing the truth. However, the incident in Charleston affirms the studies and reinforces that fact that there have been many assaults perpetrated by rightist individuals and groups, but not a single successful attack by ISIS. Yet which of these does Fox News work so hard to make people fear? 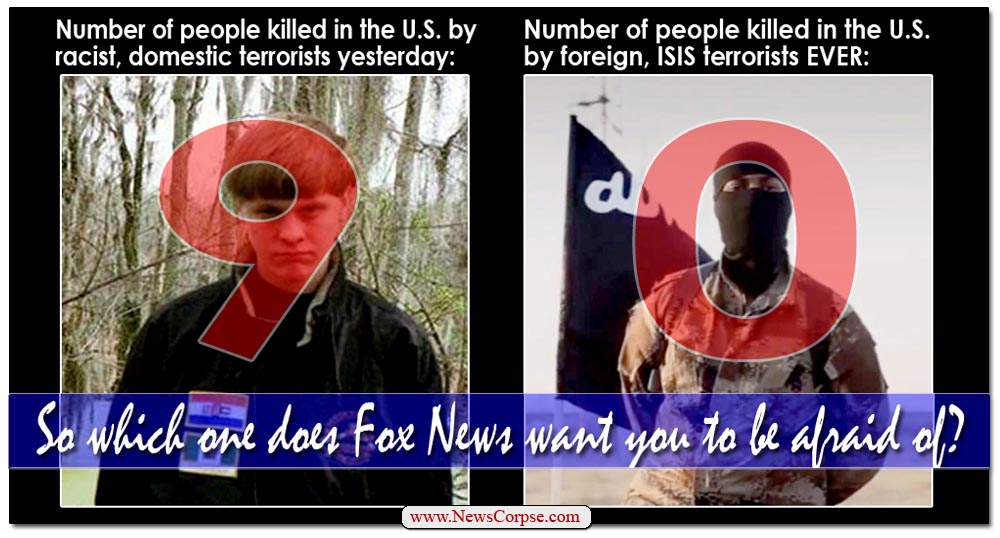 The Charlston whitewash began with the first Fox News program in the morning, Fox & Friends, where they hosted wingnut pastor E.W. Jackson to discuss distort the story. Jackson was introduced by Steve Doocy who was taken aback because “extraordinarily, they called it a hate crime.” Doocy didn’t bother to explain just what he thought was extraordinary about it, but Jackson went into some further detail:

“We’re urging people to wait for the facts. Don’t jump to conclusions. But I have to tell you that I’m deeply concerned that this gunman chose to go into a church, because there does seem to be a rising hostility against Christians across this country because of our biblical views. And I just think that it’s something we have to be aware of and not create an atmosphere where people take out their violent intentions against Christians.”

So after cautioning everyone not to jump to conclusions, Jackson leaped ahead to suggest the utterly improbable notion that a white man firing randomly into a congregation of black parishioners was actually an assault based on religion and not race. He propounded this theory even though there were already reports that the shooter had announced his his racist purpose before he began shooting, saying that he was there “to shoot black people.”

Of course, the Curvy Couch Potatoes readily agreed with Jackson and commended him on making a good point. But if this weren’t bad enough, Jackson continued to interject something else that was on his mind:

“And I would mention one other thing very quickly, and that is I would urge pastors and men in these churches to prepare to defend themselves. It’s sad, but I think that we’ve got to arm ourselves.”

No one should be surprised that Fox News would seek to advance their pro-gun agenda after another mass murder by another crazed gunman. It’s what they did after the massacres at Sandy Hook, Virginia Tech, Aurora, Colorado, and elsewhere. Shilling for NRA-theists is an inbred trait at Fox News. However, it is disturbing that in this case they chose Jackson as their mouthpiece since he has a history of advocating an avowedly militant philosophy. Earlier this year he spoke at the National Press Club to denounce marriage equality. He declared that gay marriage was contrary to God’s plan and pledged that Christians “will give our lives standing for the truth.”

Considering the hostility that Jackson and his peers have for those with whom they disagree, and his determination to fight to the death against what he considers sinful, it would be inviting tragedy to put guns in the hands of people like him. He’s already aching for a war and he believes that he and other Christians are the oppressed victims who are justified in taking up arms. Talk about a recipe for disaster.