Real estate fraud and TV game show host, Donald Trump, has bought into another season of his long-running comedy show “The Pretentious.” In a speech at his own Trump Tower in Manhattan, Trump defied his critics by actually continuing to pretend that he is running for president of the United States of America.

Trump’s forty-five minute rambling regurgitation was notable primarily for two themes: 1) How terrible America is, and 2) How great he is. By the end of the speech it was clear that Trump thinks he is doing the nation a favor by allowing us to vote for him (although it will never get that far). After petulantly calling all other public servants “stupid” and “losers,” Trump unveiled the latest branding for his 2016 presidential bid: “The American Dream Is Dead.” 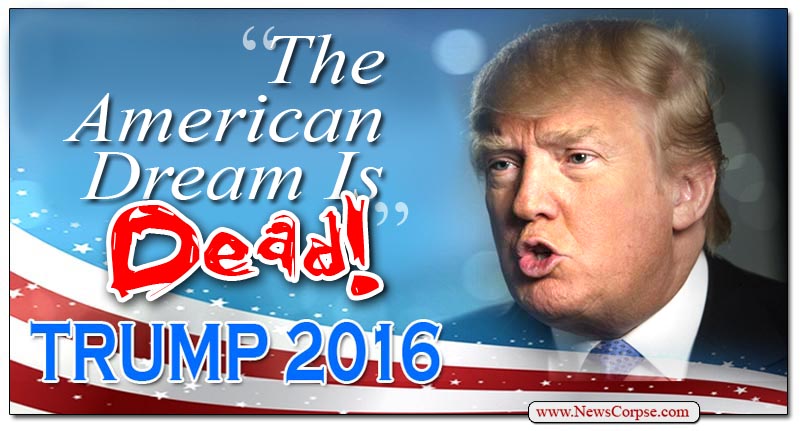 That ought to fire up the Republican Party that is so bereft of competent leaders that Donald Trump is currently ranked in the top ten (along with such respected statespersons like Ben Carson, Rick Perry, Carly Fiorina, and Rick Santorum). Trump promises to resurrect a better, stronger Zombie American Dream with a Great Wall on its southern border, no healthcare for its citizens, an abundance of guns, and deal-making lobbyists in place of foreign ambassadors.

Trump’s new “dead dream” platform appears to be replacing the one he floated last month that declared that “This Country Is A Hell Hole.” (Seriously, he really said that). These appeals to conservative, Tea Party Republicans may attract some support since most of them also spend a majority of their time complaining about what a rotten country this is. These pseudo-patriots believe that our troops are brave when they are killing brown people in foreign lands, but are evil invaders when they conduct training exercises in Texas. The American Dream may not be dead, but with Trump’s candidacy, you can’t say the same about the Republican Party.

As an example of Trump’s diplomatic skills, he spoke about our neighbors to the south and said that Mexico “is not our friend. They’re killing us economically. […] They’re bringing drugs, they’re bringing crime, they’re rapists. And some, I assume, are good people.” Setting aside the fact that this “unfriendly” neighbor is one of America’s biggest trading partners (second biggest market for exports and third biggest for imports), it was nice of Trump to concede that there are “some” good Mexicans out of the 11,000,000 drug dealers, criminals, and rapists that are currently living here undocumented.

The main reason that most people don’t take Trump’s candidacy seriously (other than his crazed birtherism and crass demeanor) is that he would be required to file detailed financial reports that would expose him as a fraud. He brought this up during the speech and insisted that he is proud of his financial status. Well, he’s also proud of his hair, so we can’t place much stock in what makes him proud. More to the point, he still has not produced any bona fide financial statements, and the one that he did produce was blasted by Forbes Magazine as “Exaggerating His Net Worth (By 100%).” And the conservative magazine Newsmax debunked Trump’s wealth claims saying…

“Most of his signature property, Trump Tower on Fifth Avenue in New York, is comprised of condominium units and common elements — hallways, elevators — that have been sold and no longer hold value for Trump. […] Developers in locales as far flung as South Korea, Turkey, Panama and Hawaii have paid Trump fees to put his name on buildings he neither constructed nor owns.”

Additionally, Trump’s vaunted reputation as a real estate wizard is a fairy tale and totally undeserved. His businesses have failed on numerous occasions and filed for bankruptcy at least four times. It’s on the basis of that resume that Trump hopes gain support.

Trump has thirty days to officially file his candidacy and produce financial records that show assets, liabilities, and sources of income for himself and his immediate family. He promised today that he would so, and do it on time with no extensions. I still don’t think he’s going to do it. However, the delay gives him time to appear in the first GOP debate that will air on Fox News next month. He’ll be on Fox News sooner than that though, as he visits Bill O’Reilly tonight for his first post-announcement interview (bypassing Sean Hannity).

If Trump does follow through and becomes a real candidate, it will be interesting to see where his support comes from. He doesn’t need regular people to donate to his campaign as he can self-finance if he wants. Most likely the group of Americans that will contribute most generously will be the professional comedians lobby. They are a powerful special interest group and have an agenda of expanding joke-creation and restoring America’s hysterical exceptionalism.